Police Chief on upgraded Homeless Liaison Program: The Cannots and Will Nots 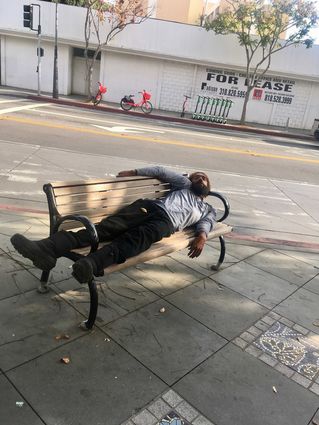 A homeless man asleep on a bench in downtown Santa Monica

In a video released on Wednesday, Santa Monica Police Chief Cynthia Renaud informed the public of the steps being taken by her department regarding the homeless on the street.

The department's Homeless Liaison Program (HLP) consists of 8 police officers, one sergeant, and a worker from the Department of Mental Health. The unit now operates 7 days a week, often starting as early as 4 am.

In the video, Sergeant Erika Akulfi explains that the mission of the HLP is to "create a social safety net that disappeared back in the 80s." Their targets are people who don't have family to take care of them or who are "caught in dire straits." The goal is to help people on the street get connected to services that can help them. The police team uses a dual approach of "outreach engagement and enforcement."

The outreach engagement begins before dawn. This is when individuals are "in place and they're not running around the city," explains Officer Rashad Riley in the video. The members of the team go up to people, ask about their situation, and see if they can connect them with services that could help them.

Often people living on the street are not aware of what support might be available to them, says Akulfi. But she admits that "the folks we run into on the street are not the ones that are readily accepting services." In her experience, people who are willing to accept support services already do so, walking into Section 8 or the Department of Social Services.

The individuals the police are most often dealing with are, as she puts it, "the Cannots and the Will Nots." In these cases, the police unit tries to push people into accepting the services available to them. But "sometimes, unfortunately, we have to take the route of enforcement," says Riley. 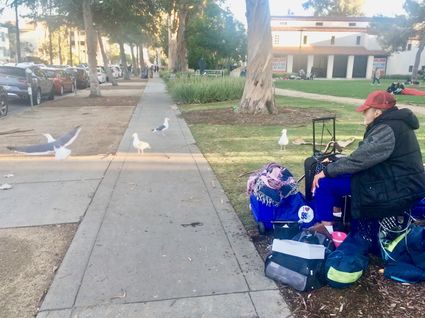 The video did not specify what laws people living on the street can violate such that the police would have the ability to enforce these laws. Residents report street people exposing themselves, publicly defecating, urinating, and fornicating, publicly injecting drugs, and squatting on private property. In most of these situations, the police declare they are unable to do anything to stop the behavior. It is unclear if only the HLP unit has training in how to interact with drug-addicted and mentally ill individuals.

When asked if she thought the HLP team was making a difference on the streets of Santa Monica, Akulfi responded with a definite, "Absolutely."

@deejeazy... Have you tried looking at other areas outside of Santa Monica for jobs? You want to live in Santa Monica and you want a job that pays a “living wage,” presumably here in Santa Monica. Isn’t this something everyone in the nation wants... a high paying job to afford them beachside living? C’mon man... you’re single and mobile. Live in N Hollywood and drive for Uber. You sound like you’re entitled with unrealistic expectations.

I agree with DeeJeazy. It is totally untrue in my experience being homeless for four years (since the City helped developers steal the home I owned for 26 years), that homeless people do not know what is available. We know. It is just horrible. So when people like the police--making more than $100K per year each--say they want to outreach to us, we want no part of it. I too would like a place where I could shower without typhus and Hepatitis danger, in privacy. I know many people who finally after 10 years reached the top of the Section 8 list and still could not find a place to use their vouchers. I know many who, like me, have less than $300 left after they pay rent (in my case after I pay bills to live in a converted van on the streets). There are not any resources that would make a real difference. They simply don't exist. Homeless people are not stupid. Housing First is all that works. When you have housing, let me know.

This is the most misleading article, there is no housing available to single adults to happen to find themselves homeless in Santa Monica! I and one of these adults, who has to sleep in his car is night because it's impossible to get low income housing unless you have a family. I've already gone to St Joseph, and I am provided a meal each day if I sign up for it. if anyone can direct me towards section 8 housing, so that I can be stable enough to gain employment finally, please send an email to [email protected] I have a college degree, and would gladly take any job this can provide a living wage. There's no way to find a job when I need to shower, and can't find a place to.