Sustainable Plastic - All We Need is a Nudge

State Sen. Ben Allen Wants to Lead California Out of the Wilderness of Plastic Waste 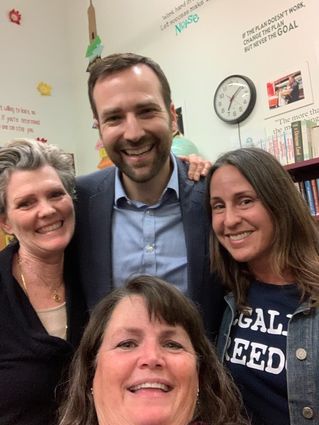 We dutifully separate our recyclables and put them in a separate container for the waste trucks to pick up, but the fact is that little of that material is currently getting recycled.

"In California, less than 15 percent of single-use plastic is recycled, and the cost of recycling exceeds the scrap value of the plastic materials," writes California State Senator Ben Allen on his website on February 21, the day he and fellow senators Nancy Skinner (D-Berkeley) and Scott Wiener (D-San Francisco) introduced a bill to phase out the sale of single-use plastics by 2030.

For decades, the United States has been depending on China and other developing countries to accept our unwanted recyclables. This came to a screeching halt in January, 2018, when China banned or severely limited the importation of many types of solid waste in a program called National Sword. The result is that our exports of plastic scrap to China in 2018 dropped by 99 percent.

Unwanted plastic is now piling up, with some getting sent to landfills and others shipped to parts of Asia where they are not yet so particular. In the latter case, however, the plastic is being burned, hardly a benefit to the environment.

Recycling plants do not exist in California, not even for paper. According to Allen this is because oil prices are down and "it's so damn cheap to produce virgin plastic."

The purpose of SB 54/AB XX, the single-use phase-out bill, is to push the market so that recycling products becomes economically desirable. To "nudge," a word Allen uses frequently.

"We know the technology exists (for recycling or creating compostables). The bill is to help reinvigorate the market," he said.

Allen et al's proposed legislation addresses "single-use" material. This encompasses just about everything that is not intended for permanent use. Look inside a grocery store, and nearly all of the packaging involves "single-use" material, from the carton around your milk to the plastic package holding your cookies or yogurt or diet soda. This bill orders 75 percent of it to be made of recycled material, material that can be recycled, or material that can be composted by 2030.

The phase-out would occur in stages. By January, 2022, manufacturers of products sold in California would have to demonstrate a recycling rate of 20 percent. By January, 2026, this rate would rise to 40 percent.

That this shift to recyclable and compostable would require a very large change on the part of both manufacturers and consumers is a reality Allen acknowledges. Forcing manufacturers to adjust their processes and spend additional money on higher-tech products will obviously raise consumer prices. But Allen hopes the savings in money currently spent on trash cleanup, as much as $42 million, and the desire of California residents for cleaner oceans and streams, will help offset these price increases. "With a little nudge, we can make it affordable for consumers while pushing industry in a new direction."

In addition, he made it clear that "We will not be doing our job if we come up with a series of regulations that are onerous and run our economy into the ground. That would not meet our goals."

The proposed bill would give California's Department of Resources Recycling and Recovery (CalRecycle) the task of coming up with ways to disincentivize waste and to motivate manufacturers to use recycled and recyclable material. In the process, the task of recycling itself could be reinvigorated as a financially viable business.

In order to ensure that CalRecycle's regulations will meet the bill's objectives and will not spark vigorous pushback will involved "aggressive oversight," admits Allen. The process "involves a wise administration that takes goals seriously, but [these goals] will be for nought if it starts a consumer revolution." He added, "It's a delicate dance."

A year ago, legislation Allen introduced to ban the use of non-recyclable, non-compostable take-out food containers sold at state parks, beaches, and facilities passed in the state legislature. He said the regulations for that bill are only now coming together and have not yet been implemented. He added that the American Chemistry Council, a trade association which had initially opposed his legislation, now appear to recognize "they've got a problem on their hands, too."

"Part of what we're trying to do is rethink waste management on a global level," Allen said, acknowledging the global repercussions that already exist in a country that has been exporting its recyclables. "We can help our world move toward more environmentally friendly waste management systems while still allowing our economy the space it needs to grow and thrive."