Golf to the Sound of Bagpipes, Watch a Helium Dance between Mauro and a Clowness 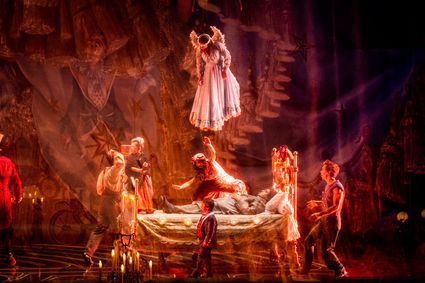 Corteo plays March 27 - 31 at the Inglewood Forum. For tickets and more information, please visit cirquedusoleil.com/corteo, and connect through social media on Facebook: https://www.facebook.com/Corteo

The show's title Corteo in Italian means 'cortege', and it is about its central character Mauro the Dreamer Clown imagining his own funeral procession as a carnival parade, in a mysterious space between heaven and earth, watched over by caring angels.

Mauro embodies the humanity within us all, and the music, by turns lyrical and playful, highlights his strength and fragility, his wisdom and kindness.

The parade of fanciful characters includes the circus ringmaster Mr. Loyal the Whistler, clearly a former military man. The White Clown is taken by appearances, he admires only stars and scorns everyone else.

The Clowness is a charming Grande Dame of the stage wondering how she landed in this nutty troupe, but puts up with their foolishness. The Giant Clown is an amateur opera singer convinced he is an international superstar. The Little Angel, all sweetness and light, watches over Mauro and acts as his guide, even teaching him to fly.

The August Clown is the White Clown's antagonist, particularly prone to falling down and generally messing up unlike the latter who is all about order and appearances.

Memorable acts include an acrobat performing on ladders with impossible balance and finesse. A marionette appears in a rigging apparatus to play with Mauro on the beach. 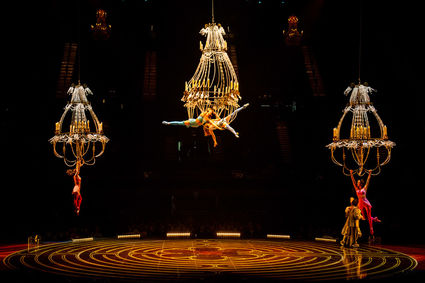 Corteo plays March 27 - 31 at the Inglewood Forum. For tickets and more information, please visit cirquedusoleil.com/corteo, and connect through social media on Facebook: https://www.facebook.com/Corteo

Six people jump like kids on two 600-pound beds that move on rotating platforms. Mauro's former mistresses perform aerial acrobatics on three giant chandeliers that spin above Mauro's bed. Five artists perform solos and group figures on Cyr wheels. There's more acrobatics on a trampoline-like net superimposed on two Korean double frame stations as well as high above the ground on a suspended pole. Eight characters pile into a tiny theatre to present a zany version of Romeo and Juliet.

There's golf to the sound of bagpipes, and a helium dance between Mauro and the little Clowness. And at the height of a frenzied moment, a gypsy performer dazzles all with her ability to spin and twirl a multitude of hoops.

Corteo plays March 27 - 31 at the Inglewood Forum. For tickets and more information, please visit cirquedusoleil.com/corteo, and connect through social media on