We need quality teachers and hardworking administrators. We got entitled staff and overpriced construction. 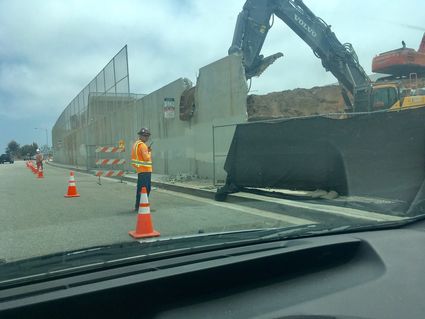 Ground broke on Tuesday for a new structure, dubbed the Discovery Building, at the santa monica high school campus. Its function is to replace the Science and Technology buildings which were demolished last summer.

The building will form a U around an interior courtyard. Planned to open at the end of 2021, it will contain 38 classrooms, offices for the M and O houses, 3 multipurpose rooms, some common areas, and a full kitchen and cafeteria. A rooftop garden will serve as another classroom and a suite for medically fragile students is planned. The current indoor swimming pool will be abandoned in favor of a new outdoor swimming pool beside the new structure.

Bond measure ES, approved by voters in 2012, funds the construction with $385 million.

According to Samohi Principal Antonio Shelton, "This building is planned to support 21st-century, future-ready learning with larger classrooms, breakout spaces and common areas that will support differing modalities of learning."

A PowerPoint presented in April, 2018 shows detailed plans for the building and includes a three-dimensional view of the ultimate plan for a new and improved high school. In the illustration, there are only two or three currently-built structures that will remain undemolished.

That's the news. Here's the attitude.

There are so many things wrong with this picture that it's hard to know where to start. Let me break it down:

1. The idea that new buildings are necessary or will be effective at improving education

As a former architect, I am well aware of the importance physical space can have on the human interactions that occur within that space. Having said that, no architecture, no matter how clever and "innovative," is going to have a significant effect on quality of education. A new building will certainly not enable the high school to "support 21st century, future-ready learning."

What is needed are quality teachers supported by hardworking administrators - all of whom make the focus the student rather than the teacher. Several years ago, the school district received an outside audit of their effectiveness, and the main flaw revealed was that the district was "adult-based." In other words, the teacher's union runs the show. Policies and practices all revolve around what's good for teachers, not what's good for students. As far as I know, that culture has not changed one drop since the report was published. Certainly, it was never addressed.

A new building and oddly-configured classrooms that enable "breakout sessions" will probably have zero effect on educational outcomes. By the time students arrive at high school, they have already decided whether or not they want to learn. To engage students who have been disengaged for years because they may have learning disabilities, emotional issues, or who simply will not thrive in the factory-style classrooms of public school, you will need more than a wall that opens up the classroom or a whiteboard placed in a public space.

Furthermore, the classroom of the future will probably not be at a school at all. Truly 21st century teaching should probably be done by competitive, high-production-value studios such as those that produce National Geographic and Discovery Channel videos. In fact, the videos don't even have to be that expensive. Anyone with a child under the age of 20 knows that kids learn from YouTube. A lot. Most of my child's grasp of history and economics comes from videos created by passionate amateurs. That sort of passion reaches kids a lot more effectively than wage-guaranteed union hacks who rush out of school as soon as the bell rings in order to get to their moonlighting job.

Yes, there are many dedicated, wonderful teachers in our school district. But there are too many others who have no interest in the students at all.

And can we please stop talking about a 21st century education? In any century, we must teach children the fundamentals of mathematics, good writing, and real history (as opposed to revisionist brainwashing). They can move on to what is necessary for the 21st century once they have mastered the basics.

Santa Monica High School already has a swimming pool. An indoor swimming pool, a place secure from weather that is far too cold for much of the school year to invite anyone to want to wear a bathing suit and jump into the water.

But adults seem to think kids have no nerve endings. Expecting children to jump into a swimming pool in December is so similar to expecting children to study for five hours after they get home from school - and baseball practice. It is an interesting psychological phenomenon that a certain group of adults, usually those who make the kind of decision to exchange an indoor pool for an outdoor one, practice uninhibited sadism on youth.

Of course, moving the swimming pool is also a colossal waste of money.

3. Bond measures for new construction at SMMUSD schools is a huge scam in general.

Santa Monica High School does not need new buildings. It needs far, far better maintenance of the structures it already has. The pavement at Samohi is littered with debris that has been there so long it is engraved into the concrete. The bathrooms are old with malfunctioning fixtures, plumbing problems, and piss-poor maintenance. Students complain of chronically broken toilets and filthy litter in the bathrooms.

Blaming the students for poor maintenance is a common way of avoiding the issue. Ask the manager of the fanciest hotel in Beverly Hills: you can not expect 3,000 people to keep bathrooms clean. Not even in the snootiest hotel with the snootiest clientele would expect that. You hire staff who must constantly clean up and maintain the function of the fixtures.

These bond measures only profit those who get the contracts (or who are paid to oversee the contracts) to build structures that don't significantly affect quality of education or even the quality of the environment.

It is an expensive and unnecessary rearrangement of the chairs on the deck of the Titanic.