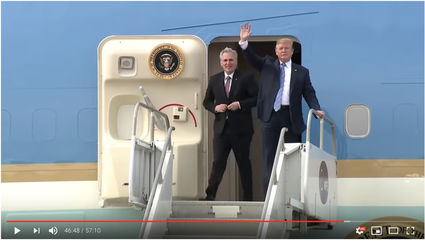 President Donald Trump swept through Los Angeles last Friday after a trip to Calexico to discuss the situation at the border with Mexico. Multiple roads throughout West Los Angeles were closed at various times during the afternoon and early evening - peak rush hour - causing delays and frustration for motorists. As other presidents, such as President Barack Obama, have done, Trump landed at Los Angeles International Airport, helicoptered to Santa Monica Airport, and from there took a motorcade to his destination. In Trump's case, this was the Beverly Hills home of Lee Samson, the CEO of Windsor Healthcare. From there, Trump went to a private dinner at Trump National Golf Club in Rancho Palos Verdes.

In Calexico, Trump had met with then-Secretary of Homeland Security Kirsjen Nielson, various members of congress, law enforcement and immigration officials, and local leaders for a roundtable discussion. Following his whirlwind trip to Los Angeles, Trump went on to spend the night at the Trump International Hotel in Las Vegas. There he attended and spoke at the Republican Jewish Coalition's annual leadership meeting. 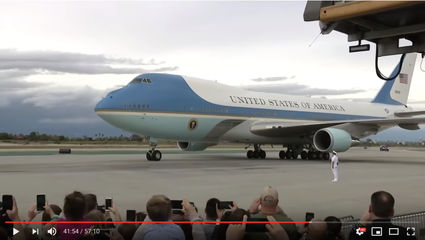 As frustrating as it is for Los Angeles residents to have to battle the traffic created by a presidential visit - added on to already horrific traffic - Trump has been light on the Los Angeles trips. No matter your political bent, it's good to have a Republican in office as far as traffic is concerned. President Trump has only been to the Los Angeles area two times since his inauguration in January of 2017. During the same time span, President Obama had visited Los Angeles four times. He went on to visit the Los Angeles area, snarling traffic, on a total of thirteen more occasions. It is highly doubtful Trump will create nearly as much Los Angeles transportation havoc during his time in office.

It will be interesting to see how presidential visits are arranged once the Santa Monica Airport is closed. This is one of many issues the Federal Aviation Administration did not take into consideration when they surrendered to the City of Santa Monica's voracious desire to close the airport. Undoubtedly, many, many more streets will end up closed if the president (whoever it will be at that time) has to travel from LAX.