A new take on the 12 Angry Men by Reginald Rose 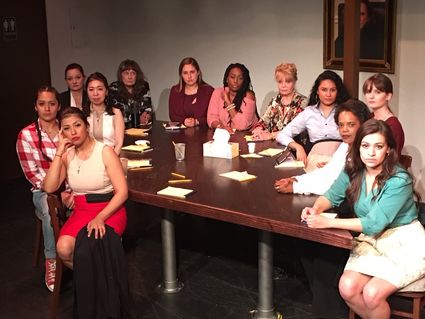 In 1954 Reginald Rose wrote a television/movie called 12 Angry Men. The plot involved sequestering 12 men in a room after a murder trial. The jurors were to dissect and analyze the evidence and possible guilt of a young man, accused of killing his father. The judge insisted there was to be no hung jury.

It takes place in any metropolitan city, the time is now.

More than 50 years later, the play was adapted by Sherman l. Sergel and tweaked to be performed by 12 Impassioned Women.

It was performed by 60 communities in 23 states the weekend of April 5- 12. Each performance was followed by voter registration.

The performance in the Promenade Playhouse was passionate, well acted and frightening .Little has changed as we read our newspapers today.

The 12 women came from varied racial, and economic backgrounds. Their individual stories will influence on how each will decide on this young man guilt or innocence

The two major antagonists come close to blows with their polar views. One women, who we think is not particularly caring ,delives a searing overview of the boy's background,"These people all lie, get drunk... with heavy racial overtones. Another woman divulges that 15 years earlier she had knifed someone and brings this confession to the jury. She insists the boy's testimony re how he held the knife is wrong. Another juror has a son she has not seen in 3 year. There is a Japanese immigrant who tells us the reason she came to America was because of our judicial system.