Venice Group raises 200,000 to fight a shelter that will "act as a magnet for homeless individuals and encampments." 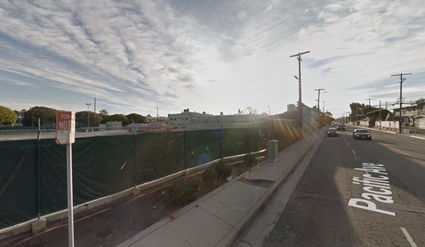 A Venice neighborhood group has initiated a legal fight against plans by the City of Los Angeles to erect a 154-bed homeless shelter on a former Metro bus yard, a few blocks from the beach.

The shelter was approved by the LA City Council last December and is to be funded from Mayor Eric Garcetti's A Bridge Home initiative. The site is supposed to provide 'transitional' housing, with the residents eventually moving on to more permanent housing. Officials claim residents will also receive support such as drug addiction counseling.

Some Venice residents have fought the proposed temporary housing idea from the beginning, claiming it would simply draw more homeless to the area. Venice is home to approximately 1,000 homeless individuals, most of whom do not currently live in shelters. Even if the planned shelter functioned as hoped, it would be a mere drop in the bucket.

As soon at the Council voted for the shelter, the Venice Stakeholders Association began raising money to oppose the building. By January, they had raised $100,000. To date, they claim to have gathered $200,000. Mark Ryavec, president of the VSA, says the donations come from more than 100 individual donors who live in Venice. The group has already filed suit against the City of Los Angeles and the California Coastal Commission, claiming that officials did not follow environmental law when they approved the shelter. In March, the group sued Metro after that agency signed a lease agreement with the city.

The lawsuit by VSA complains that the proposed homeless shelter will "act as a magnet for homeless individuals and encampments." As such, it will cause increased "noise, litter, discharge of sewage" and impact public safety. The trash and consequent outbreaks of once-extinct diseases such as typhus and hepatitis have become a hallmark of areas where homeless encampments have cropped up.

The Venice temporary housing shelter is supposed to be a stopgap measure to house the homeless while funds collected via 2016's ballot Measure HHH are used to construct more permanent housing. The idea behind Garcetti's Bridge initiative was to erect the temporary structures quickly, perhaps without the lengthy approval processes required for more permanent construction. The VSA lawsuit says what's good for the goose is good for the gander. If the government is going to impose strict environmental and other controls on private construction, then it should do the same for its own pet projects.

A Los Angeles County Superior Court judge will rule on May 10 whether to issue a preliminary injunction that would halt the project. The City is awaiting that decision before commencing construction. Government officials had hoped to have the shelter open by this spring. For a private individual to get the necessary permissions and approvals to build - especially mere blocks from the beach - would take far longer than the three or four months that city officials had apparently thought they would need. 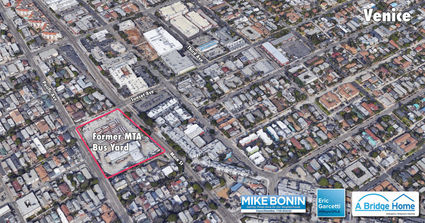 The yard takes up an entire block between Pacific Avenue and Main Street south of Sunset Avenue.

The VSA's ultimate goal is to move the proposed shelter to another location entirely, one outside of Venice. "What idiot would put this in a residential neighborhood on some of the most expensive land in California?" Ryavec is quoted as saying. Not only is this an economic absurdity, but the presence of the shelter, he believes, would only draw more homeless to an area already flooded with such individuals.