Bobcat 362 Gives Birth to a Litter of Four Kittens, and Boy are they Cute!

Survivors of California Fires, mom will care for her kittens until they are nine to 11 months of age. And then.... 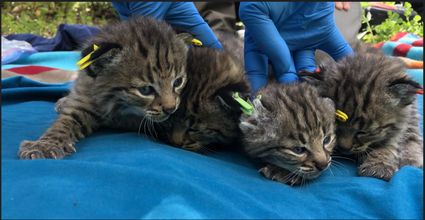 bobcat captured and collared a day before the Woolsey Fire started last November gave birth to four kittens recently - B-364, B-365. B-366 and B-367

A young bobcat captured and collared a day before the Woolsey Fire started last November gave birth to four kittens recently - B-364, B-365. B-366 and B-367, said the National Park Service in Thousand Oaks, CA Friday 4/19.

While the mother was away from her den, her kittens were weighed, measured, and given a general health check by researchers. They were also ear tagged for the purpose of future identification.

Biologist Joanne Moriarty, who has been studying bobcats at Santa Monica Mountains National Recreation Area for more than 15 years, said she was happy to see a bobcat reproduce, especially after such a tumultuous time in the region.

"This cat first had to deal with her habitat getting completely burned in the fire and then finding a new home in an unburned area," Moriarty said. "She chose a den in thick brush where she could keep her kittens safe."

Moriarty added that overall, it's been a stressful time for wildlife, "but we're happy to see her thriving despite the challenges."

The mother, B-362, was originally captured in the Hillcrest Open Space, west of Westlake Blvd. This area in Thousand Oaks is owned by the Conejo Open Space Conservation Agency (COSCA) and it burned in the Woolsey Fire. B-362 left the area and has been living in an unburned area nearby.

The other female in the current study that researchers are following, B-360, has remained in the burn area and does not seem to have reproduced. It is unlikely that she will reproduce this year, but it's too early to rule that out.

An average litter size is about two and a half kittens, Moriarty says. The sex ratio in litters is generally split 50/50 male and female. B-362's litter has three females and one male.The male in this litter is the "runt" - the smallest in size and weight. The weight of the approximately four-week-old kittens ranged from less than a pound to 1½ lbs.

Bobcat kittens typically stay in the natal den for four to five weeks, then mom will move on to other dens that they use for shorter periods of time. Researchers are not sure why they do this, but they speculate that it's likely an anti-predator behavior. Mom will typically also keep them in dens until they are 12 weeks of age, and then at that point they will follow her as she hunts and goes about her day.

The mother cares for the kittens, in general, until they are nine to 11 months of age. They then slowly become independent, but they will still occasionally check in with mom every so often.

Last month, B-361, a male bobcat captured the day before B-362, was killed by a car on Las Virgenes Road in Calabasas. Being struck by a vehicle is the second most common cause of death for bobcats in the NPS bobcat study, second only to mange.

Humans have definitely encroached on their habitat but they are naturally resilient, Moriarty said. "There are these large habitat patches, but still, they run into some issues like mange and sometimes cars."

Between October and February, researchers generally employ from six to 12 traps to monitor the population by capturing, tagging, and radio-collaring animals. Trapping is stopped in late winter because female bobcats give birth in early spring and then are caring for their young. 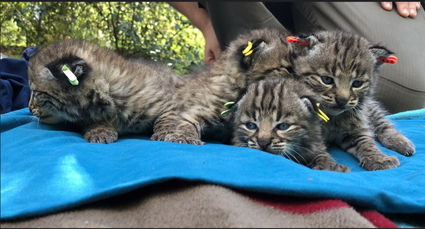 The bobcat trapping season ended in mid-February and despite the interruptions - a destructive fire that destroyed some of their home ranges, lots of rain and a government shutdown - researchers managed to capture seven bobcats. The current study area goes from Cheeseboro Canyon west to Wildwood Park in Thousand Oaks and south of the 101 Freeway in the Liberty Canyon area of Agoura Hills.

Since 1996, biologists at SMMNRA have been studying the ecology of bobcats in urbanized areas of LA and Ventura Counties to learn more about how they survive in an urban area, how they use the landscape and how that may differ from living in a more contiguous natural habitat. When the bobcats are captured, a general health check is performed, which includes taking hair and tissue samples and fitting them with a radio collar so their movements can be tracked. They are then released.

To learn more about the bobcat study, visit https://www.nps.gov/samo/learn/nature/bobcats.htm.