Hundreds of Officers and Others Attend Funeral of Rashad Riley at St. Monica's Catholic Church

"Rashad got up every morning at 4am to be on the beat and to meet the downtrodden and homeless..." 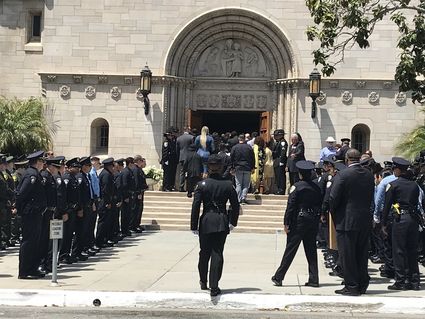 Some remembered Rashad from working with Explorer scouts. They remembered him as a kind man who was always putting the welfare of others ahead of his own.

Who Was Rashad Riley?

He was all the things most people know about... a father, a husband, an air force guy, a Santa Monica Police Officer – but he was much more. Rashad was a force of nature... enthusiastic, full of life and all fired up.

He was definitely one-of-a-kind... and very kind at that.

Rashad got up every morning at 4am to be on the beat and to meet the downtrodden and homeless who he treated with respect and without the usual judgments many of us exhibit. 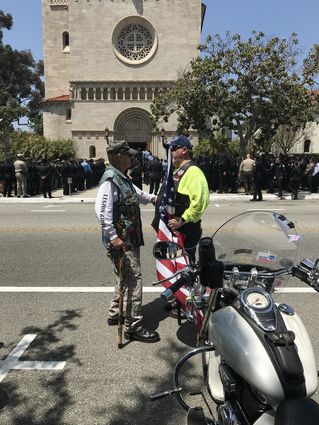 Veterans some of whom served with the deceased, at the funeral of Rashad Riley, St. Monica's Catholic Church

I had the honor of hearing him speak and exchanging business cards with him a few days before his untimely death... and in that short meeting, I sensed a friendship had been born...that’s the kind of guy he was.

I have just returned from attending his memorial service at St. Monica’s Church.... This is a VERY large church that probably seats over 1,000 and EVERY seat was filled.

I would guess there were about 300 his fellow law enforcement and military brothers and sisters in attendance... Orange County Sheriff officers, and police representatives from Newport Beach, Downy, Beverly Hills, Inglewood, Torrance, Pasadena and many other cities. All in formal uniforms and I with a heartful of respect for their brother officer.

Not too original a statement, but nevertheless true - there was not a dry eye in the place.