Riding Double is Trouble: Can Bird Build a Better Scooter Before it Runs out of Cash?

Bird, Inc has skyrocketed to the top tier of major global mobility innovators, with its scooter offerings being adopted in cities around the world. But it still hasn't figured out how to make money. It's now pinning its hopes on a new custom scooter. 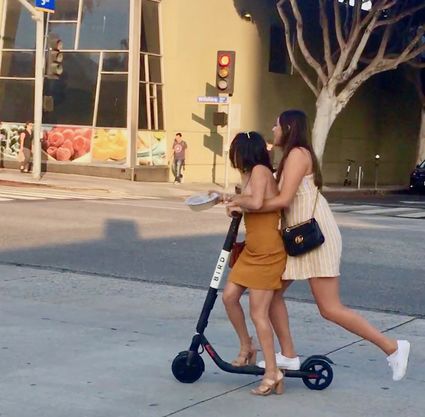 (tca/dpa) - A year ago, Bird Rides Inc. was flying high - and Silicon Valley was betting that it would keep on climbing.

Thousands of the Santa Monica start-up's signature black-and-white scooters appeared on street corners across the world, bought with venture capital and rented to smartphone-toting riders.

Investors saw how quickly riders took to the new mode of transit, and visions of Uber-size growth and revenues flitted through their heads. In March 2018, just six months after the first Bird hit the pavement, venture funds poured in 100 million dollars. In June, they dumped an additional 300 million dollars. Bird's valuation soared to 2 billion in a matter of months.

But today, facing a crowded field of competitors, pushback and fees from local governments, and fundamental questions about whether any company can make money by releasing electric scooters into the wild and charging per ride, staying aloft is proving harder than it first appeared.

"Growing from 50 million dollars to something like 2 billion dollars in eight months has never happened before, and is probably not supposed to happen," said Bradley Tusk, an early Bird investor and former Uber advisor known for helping the ride-hailing firm navigate its early political battles.

"If this was a normal start-up that was 2 years old, yeah, of course they haven't figured everything out yet - this is not the point in the cycle where you'd sweat it," Tusk said. "But a normal start-up also wouldn't be looking at a 2-billion-dollar valuation."

The first ill omens came in January, when the company quietly raised another 300 million dollars at the same 2-billion-dollar valuation. In an industry that prizes a perpetual uptick in valuation to propel a narrative of constant growth, a flat round spells trouble, and often a desperate need for cash.

Around the same time, the company deleted all mention from its website of its commitment to give cities a dollar per scooter per day to maintain infrastructure and build more bike lanes (though many of the deals it reached with individual cities contain fees).

In March, Bird laid off 5 per cent of its workforce, which had grown to more than 700.

And the company's official strategy began to shift. In the whirlwind summer days of 2018, Bird had adhered to the start-up mantra: Grow at all costs. But as 2019 arrived, Bird Chief Executive Travis VanderZanden (a Lyft and Uber alumnus) started to sing a different tune.

"2018 was about scaling," he said at a Malibu tech conference in January. "2019 is about really focusing on the unit economics of the business."

By unit economics, VanderZanden meant the simple math of making money on each scooter dropped into the world. And while trying to make money might seem like a basic imperative for any business, it goes counter to the preferred pattern for 18-month-old start-ups flush with venture capital cash.

Many venture-backed businesses operate on the idea that new companies should spend their first years focused on increasing market share at the expense of actually making money - once everyone in the world uses their product, the thinking goes, they can achieve economies of scale, come up with innovations that smaller companies couldn't pull off, or simply reap the benefits of being a monopoly.

This strategy, termed "Blitzscaling" in a popular business book written by LinkedIn co-founder Reid Hoffman, paid off for world-eating firms such as Amazon, Facebook and Netflix, and has been the animating principle behind Uber and Lyft, which have been locked in a deeply unprofitable race for maximal market share from Day One.

"There are very few unique companies for which you can build global scale really quickly and build a dominant market position before other people do, and for those rarefied companies scaling quickly matters more than short-term profits," said Mark Suster, an early Bird investor and general partner at the Santa Monica fund Upfront Ventures. "This is one of those rarefied companies and markets."

But most start-ups that follow the hypergrowth model are built on software (and in the case of such companies as Uber and Lyft, creative applications of labor law). Bird and its competitors, including Lime, Spin, Uber and Lyft, are in the much less forgiving business of managing a fleet of breakable, stealable scooters.

"It's not that there isn't a viable business model for these companies," said Dmitry Shevelenko, an investor who's worked at Uber, advised Bird competitor Skip and is building a company that would allow scooters to slowly drive themselves to meet users or dock at charging stations. "It's just not the Uber business model - that's what Bird and Lime were raising against, and that's where there probably will be a correction."

VanderZanden acknowledged in January that the company was far from solving its fundamental economic problem. The tens of thousands of scooters Bird had spread across the world - a mix of retail models made by Ninebot (the parent company of Segway) and Xiaomi - broke down (or were stolen or vandalized) long before they could earn back their cost.

"Those things were fragile," he said. "Clearly the unit economics didn't work on those scooters, but that was a test anyway."=

The company is pinning its hopes on the Bird Zero, a custom scooter with longer battery life and sturdier construction.

Bird declined to share details on unit economics with The Times for this article, but VanderZanden told tech website the Verge in March that the scooters would need to stay active for six months - around 180 days - for the company to just break even on the purchase price, once charging, repair and permit costs were factored in.

But based on a Times review of data used in Bird's smartphone application, even the supposedly new and improved models are falling short.

And the average life of those inactive scooters, based on the time elapsed between their first logged ride and their last before going dark, was 126 days.

The apparent life span varied between models. The Xiaomi m365 - the consumer model with which Bird first launched - averaged 124 days on the street. The two Segway models, the ESB and ESX, diverged in their reliability: The simpler ESB averaged 155 days, while the ESX, ostensibly more advanced with a longer battery life and easier-to-service parts, lasted only 82 days on average. Bird Zeros averaged only 116 days.

These life spans are far higher than those reported in Louisville, Ky., according to a Quartz analysis of detailed ride data that the city published as part of a transparency program. The 129 scooters (all retail models) that were initially deployed there lasted just 29 days, on average.

Bird disputed the accuracy of these life span estimates.

Suster, who works closely with Bird as an investor, echoed the company's stance. "I assure you, the negative narrative is not correct," he said.

He said retail scooters - the Xiaomi and Ninebot models - had a life span of three to four months. But "Bird Zero's already getting eight to 12," he said, adding that a next-generation model with better life span, ride experience and ease of repair was already in the pipeline for late 2019.

Bird has experimented with its business model in recent months. In early March, the company altered its repair program in Los Angeles, which had relied on gig workers to fix broken scooters. It moved repairs in-house (though scooters are still charged each night by an army of gig workers). Later that month, the company introduced scooters with locks in some markets, in a bid to prevent theft and vandalism.

In April, it announced the launch of a more traditional rental program in San Francisco and Barcelona, in which users could pay $25 per month to rent a Xiaomi m365 from the company rather than paying per ride.

The company also raised prices on its core dockless product in cities across America. Riders once paid a dollar to unlock a scooter, and then a flat rate of 15 cents per minute of riding. Now, per-minute fees have increased to 25 cents in Los Angeles and Austin, 29 cents in Baltimore, and 33 cents in Detroit and Charlotte. In other cities such as Bloomington, Indiana, and Charlottesville, Virginia, rates went down to 10 cents per minute.

And since last year, the company has been promoting Bird Platform, which sells scooters and technical services to local operators around the world in exchange for a 20 percent cut of their revenue.

Experimentation is the norm at start-ups, especially young ones. But moves that prioritize balance sheets over growth are more common in firms short on cash or those looking for an exit, either through acquisition or an initial public offering.Bird's competitors face the same challenges. Lime - Bird's biggest competitor with more than 700 million dollars raised - continues to pursue an aggressive growth strategy, though it is not permitted to operate in its hometown of San Francisco. Skip, which shares exclusive rights to the San Francisco market with Scoot, pulled in 100 million dollars in debt financing in December. Spin, which Ford bought for close to 100 million in November, is unique in using only in-house chargers and mechanics.

Uber and Lyft, which have valuations and cash flows from their core ride-hailing businesses that dwarf those of scooter-only companies, both have scooter operations as well (Uber operates Jump).

Investors and mobility experts remain optimistic that Bird - or at least some form of a mass scooter business - will land on a viable strategy before the cash flow dries up.

Many cited a section of Uber's recent regulatory filings, which predicted that a majority of trips under three miles will happen on electric scooters as opposed to cars in the near future.

"It's a complicated business with lots of issues to resolve, from unit economics to regulatory to marketing," Tusk said. "But the market is so big, and there's so much opportunity as the world trends towards congested urbanization, that the thesis holds for a while."

Others pointed to a possible soft landing for scooters as a component of city transit services along the lines of existing bike-share programs. Juan Matute, deputy director of UCLA'sInstitute of Transportation Studies, said that public-private partnerships could spark more investment in charging stations, which would reduce costs and compel law enforcement to pay more attention to theft and vandalism. 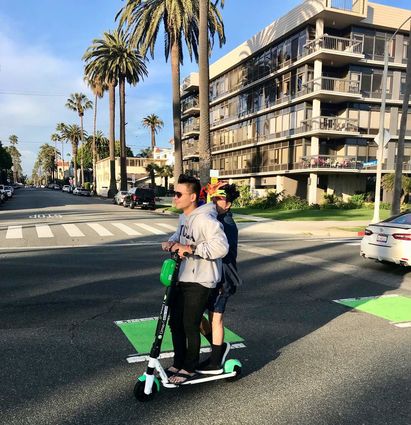 "The unit economics might work out as a result of all this VC investment," Matute said. "And then some of the less sexy smaller providers that have been involved in the bike-share space can start offering some of these types of vehicles as a city-contracted managed provider."

Scooter companies are betting that more durable two-wheelers will lead to profitability, though questions about brand loyalty remain.

Suster says Bird's head start on the competition has given it operations expertise and a wealth of rider data that constitute a "moat" - a defense against any competitors trying to steal its business.

"It looks so easy - you just put these scooters out and have revenue," Suster said. "But it's a complex asset management business, like owning airplanes or trains - our ability to maintain these scooters at cost, repair them quickly, and have them back out in the street at scale means our advantage is much greater than any new entrant."