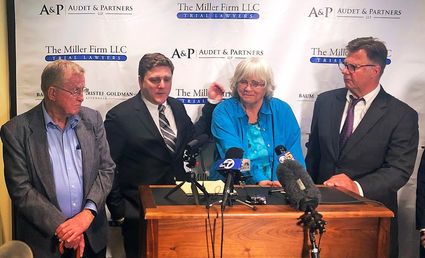 Alva Pilliod, left, and Alberta Pilliod, third from left, with their lawyers after a jury ordered Monsanto to pay the Pilliods $2 billion in damages.

In a third strike against Monsanto, maker of the weed-killer Roundup, an Alameda County jury awarded over $2 billion to a Livermore couple who each contracted non-Hodgkin's lymphoma. The couple, Alva and Alberta Pilliod, received $55 million for compensatory damages and $1 billion each in punitive damages. Punitive damages are related to the goal of punishing the defendant for their malicious behavior rather than to the goal of compensating the plaintiff for injuries sustained.

Previous awards against Monsanto regarding Roundup include Dewayne Johnson, who in 2018 was awarded $289 million for the terminal cancer he asserted had been caused by his use of the glyphosate-based weed-killer during his work as a school groundskeeper. On appeal, a judge reduced this amount to $78 million. In March of this year, a San Francisco jury determined that Roundup was responsible for the non-Hodgkin's lymphoma of plaintiff Edwin Hardeman, who'd used the weed-killer for 30 years. The jury awarded him $80 million.

Bayer, parent company of Monsanto, is appealing all of the verdicts. In a statement regarding the Livermore couple's verdict, Bayer said it "conflicts directly with the U.S. Environmental Protection Agency's interim registration review decision released just last month, the consensus among leading health regulators worldwide that glyphosate-based products can be used safely and that glyphosate is not carcinogenic, and the 40 years of extensive scientific research on which their favorable conclusions are based."

In internal emails among Monsanto's executives that were released as part of the Pilliod's lawsuit, the company was shown to have recruited outside scientists to author reports citing the safety of glyphosate. One Monsanto executive, William Heyden, even proposed ghost-writing such a paper, in which he would keep the cost down by doing the writing in-house and simply paying the scientists to edit and sign their names to the allegedly scientific paper.

Santa Monica's City's Assistant Director of Public Works, Dean Kubani, claims "the science is not settled with regard to glyphosate and human health impacts." He says the IARC is the only scientific body to categorize the chemical as dangerous. "[t]There is a consensus among other pesticide regulatory agencies and scientific bodies throughout the world including the Canadian Pest Management Regulatory Agency, the European Commission, the German Federal Institute for Risk Assessment, the Australian Pesticides and Veterinary Medicines Authority and others that glyphosate does not pose a carcinogenic risk to humans."

Nevertheless, more than 13,000 other lawsuits have been filed against Monsanto relating to Roundup. 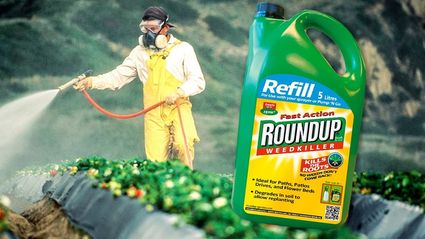 The City of Santa Monica continues to use Monsanto's Roundup for weed control. How about hiring homeless people to pull weeds?

Meanwhile, the City of Santa Monica continues to use the weed-killer in City parks and landscaping. Given the three large verdicts against Monsanto, it hardly matters if glyphosate is actually a carcinogen or not. Clearly, anyone using it is setting themselves up for large civil liability. For an entity with deep pockets like the City of Santa Monica, this is financial suicide.

Roundup is a wee-killer. It is a convenience and luxury item. It's not a necessity. There are other ways to kill weeds than by dumping chemicals on them. Kubani claims that weeding by hand would increase labor costs and decrease the efficacy of weed control, thereby degrading the quality of landscaped areas.

Pay some laborers to weed the landscaping. The small amount of money you spend today will be money saved later when you avoid a $2 billion judgment against you.