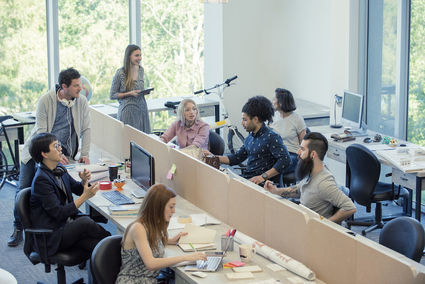 The level of pampering at co-working spaces in the US has caught the attention of landlords, who are upping their game to attract tenants with lobby coffee bars and hospitality services.

Co-working is often more pleasant these days than putting in eight hours at a traditional office.

If you'd prefer a workspace that looks like a chic hotel lobby with waiters at your service, that can be arranged.

Is your goal to hang with other creative types? There are co-working clubs that want you as a member.

But while the offices strive to be oases of fellowship, the co-working business is more like a free-for-all.

Co-working offices emerged a decade ago as offbeat, bare-boned affairs that served start-ups and the self-employed of the emerging gig economy. But now their appeal has broadened even to mainstream companies looking for the flexibility to ramp up or wind down operations as quickly as situations demand. Other big tenants just want to avoid the hassle of setting up and maintaining their own offices.

And as co-working has evolved and its appeal has proved more than a fad, a rush of start-ups has joined the competition, including one from the real estate services industry, which has long had a near monopoly on leasing office space.

The new players are driven both by opportunity and competition: specifically, the ravenous reach of WeWork, the co-working pioneer that has spent freely to lock up market share and shows no signs of slowing.

WeWork has been willing to absorb massive losses as the company follows the internet model of getting big before getting profitable - best epitomized by ride-hailing giant Uber, which raised 8.1 billion dollars in its initial public offering last week even though its total operating losses exceeded 10 billion dollars over the last three years.

And while questions swirl about whether Uber will ever make a profit, so do they for WeWork. The company has ridden the coattails of the country's long economic expansion, and it could be vulnerable in a downturn.

But its competitors can't assume that the market will inevitably humble WeWork - as Amazon has demonstrated by rising from cash burner to cash cow.

"You can say, 'Give me turnkey space,' and they can do it very quickly, and that is changing the nature of the office market," said analyst Steven Kurtz, of accounting firm BDO, who has tracked the growth of co-working.

WeWork, which started out nine years ago in New York with six floors in a SoHo building, now has more than 400,000 members paying for access to 45 million square feet worldwide. That's more space than exists in all of downtown Los Angeles.

Locally, the company has gobbled up about half of the 4.5 million square feet now devoted to co-working, said Peter Belisle, Southwest director of real estate brokerage JLL.

In addition to the three floors it occupies in the Pacific Design Center's Red Building, an expensive trophy property in West Hollywood, WeWork recently leased an additional 45,000 square feet in the center's Green Building.

Meanwhile, rivals are offering their own unique versions of co-working space, which Belisle predicted would double in Los Angeles over the next three to five years.

One of the most high-profile new entries is the Wing, a New York-based company founded by two female entrepreneurs that opened a branch last month in West Hollywood. It's taken a niche approach by tailoring its offices and services to women's needs and preferences.

The scale of the furnishings at the Santa Monica Boulevard outlet is smaller. The thermostat is kept at roughly 22 degrees Celsius, rather than the chillier temperatures men seem to like. The attention to detail even extends to the upholstery, with chairs covered in soft fabrics that don't cling to dresses.

"All of these tiny considerations are made with working women in mind," spokeswoman Zara Rahim said.

And larger considerations, such as providing child care for women juggling parenting with business or school, aren't forgotten.

That formula has proved a success, with the company opening seven offices nationwide since it got its start three years ago in New York's Flatiron district.

The Wing also offers "support circle" meetings to talk about parenting issues, mental health, physical illness and recovery from addiction, as well as other programs.

It's just one of the latest crop of co-working companies offering events, meetings, lectures and other get-togethers known as "programming" as key selling points as they look to differentiate themselves from one another - and from conventional office landlords focused on keeping the lights on and the lobby clean and secure.

WeWork may have set the pattern by hosting happy hour parties and TED Talks, and it's continuing to innovate. At its Playa Vista location this summer, WeWork tenants will get the chance to pitch their business ideas to investors - "Shark Tank" style.

Even private clubs that primarily offer posh spots to do business deals, hang out and entertain clients are getting further into the business. Soho House in West Hollywood is planning a SoHo Works offshoot offering 24-hour co-working offices.

The level of tenant pampering being instigated by co-working providers has caught the attention of landlords, who are upping their game to attract tenants, said real estate executive Martin Caverly of Los Angeles landlord and developer Lowe.

Building owners may do something as simple as turning unused lobby space into a coffee bar, or partner with support-service firms such as Convene that provide co-working space while also offering hospitality services to the entire building.

At the Wells Fargo Center in downtown Los Angeles, Convene sends up breakfast every morning for about 200 workers at the headquarters of the financial firm Oaktree Capital Management. Catering is just one of the New York company's services.

In its own space at the office complex, Convene built plush meeting rooms and dining spaces that building tenants can rent on an as-needed basis for events they can't host in their own digs.

Convene also offers co-working space meant to appeal to individual contractors, but most of it is designed to serve midsize companies in need of temporary quarters in downtown L.A. that reflect their corporate self-image.

The emergence of co-working space as a popular office category poses some financial risks for landlords, according to analysts at Green Street Advisors.

By packing people in more densely than conventional offices, co-working is expected to reduce overall office demand in the country as much as 3 percent by 2030, in an industry accustomed to growth, a recent report by Green Street said.

Co-working operators may also snag tenants that would otherwise sign directly with a landlord.

Landlords, who like to lock in tenants for a decade or more, will feel pressure to offer more short-term leases to compete with the easy in-and-out options offered by co-working operators.

"Office landlords will be increasingly forced to react" to competition from co-working companies, Green Street said, by launching their own flexible office offerings, financially partnering with co-working operators or outright competing for tenants.

Tishman Speyer, one of the world's largest office landlords, is doing just that.

The New York company announced last week that it has opened co-working offices at a building it owns in Beverly Hills and is expanding the concept, called Studio, at other properties in major U.S. markets as well as Europe and South America. 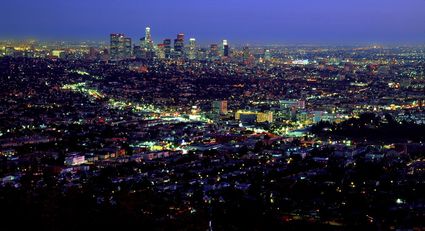 In Los Angeles, shared office company WeWork has gobbled up about half of the 4.5 million square feet now devoted to co-working.

The company said it was moved to open more co-working offices after all 35,000 square feet in its first Studio in Rockefeller Center in New York were leased within five months in what Studio's managing director Thais Galli called an "immediate and overwhelming success."

Real estate brokerages, which profit from arranging leases for co-working businesses and their landlords, are also looking to get involved by joining their landlord clients in the flexible office field.

Kurtz, of BDO, says that as he sees it, co-working has successfully disrupted the office market and is not going away.

"The modern co-working companies," he said, "are addressing the pain points of traditional office leasing and changing the way people are leasing space."