Confining Livestock in Factory Farms is Inefficient, Inhumane and Dangerous

Do you pay attention to food labels? Do you know what goes into the regular wholesale animal-products? 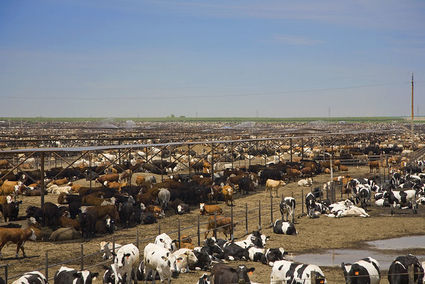 Hundreds of cows await slaughter in a pen at the Harris Ranch near Coalinga, CA

The reality of what goes on and why at factory farms where most get their animal-products is something that many aren't aware of, and something that deserves attention.

The majority of animal-products in America are sourced from farms with confined livestock types also known as factory farms. Such farms are categorized on how many animal units for the area there are. In most cases, these farms sacrifice the welfare of animals and product quality for the number of animals and production output. This problem applies to both animals raised for slaughter and not.

In the worst situations, livestock is treated with an overabundance of antibiotics. This creates more antibiotic-resistant diseases. Also, animals are kept in crowded spaces, which has negative effects on an animal's mental and physical health. For example, poultry has a strong urge to root (Spread its wings), but can't in tight cages. This results in mental health decline that can make poultry aggressive and begin to peck each other. A negative consequence of this maltreatment is a worsening of the quality of an animal product.

In addition, problems with confined livestock farms aren't just limited to the food one eats or the animals themselves, they're also affecting the environment. Confined livestock farms house a lot of animals, which will tend to leave a lot of waste behind. Massive pools of wet manure can pollute the water supply of the surrounding area in the event of a leak. Large waste reservoirs also give off gasses like ammonia and hydrogen sulfide that have been linked to anxiety, fatigue, high blood pressure, respiratory conditions, etc. Most notably, substantial cattle farms contribute most to air pollution because cattle belch methane; a known greenhouse gas.

Furthermore, confined farms are wildly inefficient. For a cow to gain a pound of weight, it takes at least 13 pounds of feed. This trend continues throughout all other majorly farmed animals. Much of the feed consists of ground up fish, which could be used more efficiently to feed people. The misuse of protein for confined farming ultimately results in a total loss of one-fourth of used proteins. 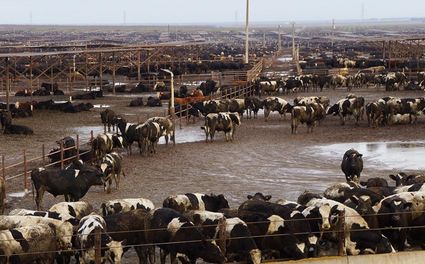 Cows at a factory farm in California

This all this brings up the question; Why do farms with confined livestock types still exist? Well, a sharp rise in the global population has caused many farmers to take a new approach to farm. A way that can feed the masses in a cheap manner. But in reality, this way of farming is just more condensed and wildly disproportionate in resources consumed compared to smaller farms. It is a shortcut that trades quality for quantity.

But, what can we do about it? For starters, we can change our eating habits to incorporate less red meats and more animal-products sourced from quality farms. If such habits go widespread, there will be less overall selling of factory farmed products. Also, we can protest in support of laws that protect farm animals' welfare, so all animals can be positively affected. All in all, if everyone decided to contribute, only then can we have a more efficient and humane farming system.