Iraq Intervenes to Block a War Between the US and Iran, It's 2 Closest Allies

The US is not seeking a war with Iran, US Defense Secretary Patrick Shanahan said 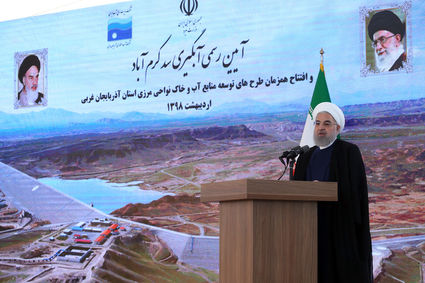 Iranian President Hassan Rouhani speaks during the Opening of Karam Abad Dam and other infrastructural and economic projects through video conference.

Baghdad/Washington (dpa) - The US is not seeking a war with Iran, US Defense Secretary Patrick Shanahan said after a closed-door briefing with lawmakers on rising tensions, saying a ramped up military presence in the Middle East was focused on deterrence.

In recent weeks, the United States dispatched a carrier strike group and a bomber task force to the Gulf, in moves that were sharply criticized by Iran, adding to tensions in the region. US officials have indicated they perceived threats to their interests from Iran.

Iraq has found itself caught in the middle and announced it will dispatch delegations to the US and Iran in an effort to alleviate tensions between the two countries. Baghdad has close ties with both Washington and Tehran.

Iraq's Prime Minister Adel Abdel-Mahdi said he will visit Kuwait on Wednesday to discuss a raft of issues, including calming the tensions.

"US and Iranian officials have assured us that they do not want to enter a war," the prime minister was quoted by the state-run Iraqi News Agency as telling a press conference on Tuesday.

Shanahan told reporters the US had managed to "put on hold the potential for attacks on Americans," indicating tensions could calm.

The US has recently indicated it feared attacks on its interests in Iraq and the wider region by Iranian-backed groups.

Shanahan and US Secretary of State Mike Pompeo were among administration officials who briefed some members of Congress about Iran in private.

Key lawmakers have expressed concerns about escalating tensions and have been demanding the White House involve Congress in any decisions about war.

Michael Waltz, a Republican congressman, told Fox News that lawmakers were updated that US military officials informed Iranian counterparts that "Iran itself" would be held responsible for any attacks by Iranian-allied groups in the Middle East on US interests.

The US pulled out of the Iran nuclear deal last year and has since imposed a raft of strict sanctions aimed at crippling Iran's economy, despite no sign of Tehran having violating the multilateral deal.

Iranian President Hassan Rowhani announced two weeks ago that his country would begin partially withdrawing from the 2015 nuclear deal, citing the US exit and the sanctions. The moves have caused concern in the region and in Europe.

Shipping vessels were recently attacked in the Gulf, which the US initially appeared to blame on Iran, but has since scaled back its allegations.

"We haven't formed a definitive conclusion that we can speak about publicly," Pompeo said on a US radio programme on Tuesday. He added that Iranian involvement in the attacks on the ships remained a possibility.

Pompeo also spoke by phone with Norwegian Foreign Minister Ine Soreide, and "his concern about the threat to international shipping from this attack."

One of the ships was Norwegian-flagged, while the others were from Saudi Arabia and the United Arab Emirates. The latter two countries are staunch Iranian rivals.

Iranian Foreign Minister Mohammad Javad Zarif told CNN that his country won't negotiate with President Donald Trump unless the US shows Tehran "respect" by honouring its commitments under the disputed nuclear deal.

"We are not willing to talk to people who have broken their promises," the foreign minister said. 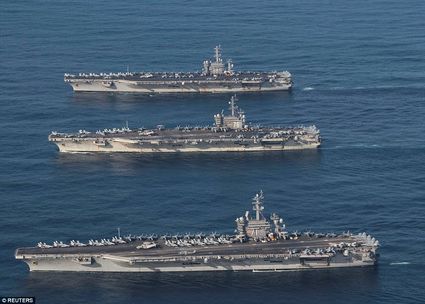 Three US Aircraft carriers at a rare gathering

Zarif warned the US was "playing a very, very dangerous game" by boosting its military presence in the region. "Having all these military assets in a small area is in of itself prone to accidents," he said.

Trump has said he does not want war, but also stepped up his rhetoric, saying in a recent tweet: "If Iran wants to fight, that will be the official end of Iran."

Last week, the US State Department ordered non-essential government staff at the US embassy in Iraq to leave the country.

On Saturday, the US-based energy company Exxon Mobil evacuated 50 US employees from Iraq and flew them to Dubai in the United Arab Emirates.

The US keeps troops in Iraq, in part to help counter an resurgence of Islamic State and to aid the rebuilding of the military. Iraq also depends on trade with Iran, its neighbour, including energy links.