By DPA
and AP Wire Services 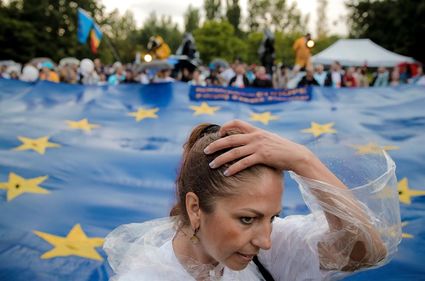 Brussels (dpa) - Early numbers suggest more citizens are heading to the polls across the European Union on Sunday than in the last election in 2014.

More than 400 million citizens are eligible to elect the 751 members of the European Parliament, in what is being described as the world's biggest trans-national election. Sunday is last and biggest day of the four-day election across the bloc, with 21 of the EU's 28 member states voting.

Numbers in the eastern member states were higher as well, based on information from Croatia, Hungary, Slovakia, Slovenia and Romania. In 2014, many of those countries posted turnout rates much lower than in western Europe.

The vote launches a new political cycle, including a change of leadership in the EU's key institutions. It comes at a time of soul-searching over Britain's planned departure and threats from within and outside the bloc.

Opinion polls have suggested that far-right, eurosceptic populists could win up to a third of seats in the new parliament, potentially hampering EU decision-making over the next five years.

In France, a recent poll put President Emmanuel Macron's La Republique En Marche behind the National Rally of far-right leader Marine Le Pen, who has pledged to team up in parliament with Italy's governing populist League.

In Germany, meanwhile, a poor performance for the Social Democrats - who will also be tested in Bremen state elections - could augur badly for the junior partner in Chancellor Angela Merkel's grand coalition.

More broadly, the elections will play an important role in determining who will be the next European Commission president, a post currently held by Jean-Claude Juncker.

Voting has already taken place in Britain - which participated reluctantly after delaying its EU departure date - the Netherlands, Ireland, the Czech Republic, Latvia, Malta and Slovakia.

Results are held back until after Sunday's close of polling in the final country, Italy, at 11 pm (2100 GMT).

A far-right party in Slovakia that openly admires the country's wartime Nazi puppet state could win seats in the European Parliament for the first time. Slovaks are among four countries voting Saturday in the Europe-wide vote, which finishes Sunday.

Polls favor the leftist Smer-Social Democracy party, the senior member of Slovakia's current coalition government to win the most votes. Polls suggest People's Party Our Slovakia, a far-right party that has 14 seats in Slovakia's parliament, will win seats in the European legislature for the first time. Party members use Nazi salutes, blame Roma for crime, consider NATO a terror group and want the country out of the alliance and the European Union.

The election reflects a continental struggle between nationalists who want to wrest power back from the EU and moderates who want to make the EU stronger.