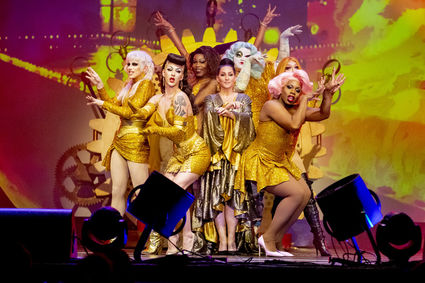 Drag queens appear in a show at Berlin's Tempodrom.

Berlin (dpa) - Short skirts and long evening gowns are strewn about backstage as the performers prepare for this evening's show in Berlin. Outside, the crowds waiting to enter the Tempodrom are wearing outfits to rival those of the performers.

Fashion designer Thomas Hanisch has chosen a bright bodysuit with a flower pattern and black latex gloves. His entire bald head is painted red, with a flower chain encircling the top.

"I took four hours to do my make-up today, and two days to make the outfit," says the 28-year-old. He enjoys wearing women's clothes in his free time, though he can't imagine working full-time as a drag queen.

But he's happy to support the seven drag queens from the famous US TV series "RuPaul's Drag Race" during their performances later tonight.

RuPaul, along with his series, is one of the most commercially successful drag queens worldwide. On his show, 58-year-old RuPaul Andre Charles, an indispensable part of the New York scene in the 1990s, has his pupils work on comedy routines and runway practice.

Throughout the show, judges critique the contestants' progress, while the candidates often have private struggles expressing their passion, and viewers get an inside look at their less-exciting daily lives.

"Drag Race" has been on US televisions for a decade and has a steady place in mainstream culture. The reality show has won multiple Emmys, and celebrities such as Lady Gaga have been guests.

"The show has also changed the German community. It's become more open, which is really great. I'm always surprised how many women are also there," says Hanisch, holding a glass of Prosecco in one hand.

Sheila Wolf and Gloria Viagra, two long-time Berlin artists, agree. "Drag Race" has pushed the drag scene into the mainstream, they say - with all the advantages and disadvantages that come with that.

Viagra is wearing a denim jacket, gold necklace and tight skirt, while Wolf is wearing a catsuit that's covered in diamonds.

Before "Drag Race," some people who come to their shows had not had any contact with drag at all, they say. Take Franziska and Matthias, for example. The couple, who have been married for nine years, stand quietly between men wearing evening gowns.

"We are living proof that the show speaks to a wider audience. We definitely stick out here," they say. The couple enjoy watching the show together. "It's colourful, varied and funny," they add. 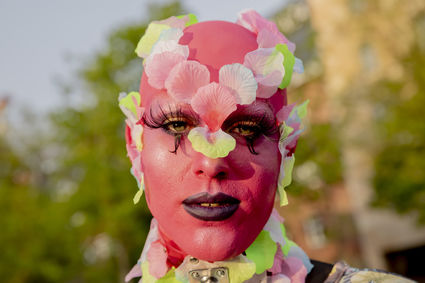 Drag queen culture has not yet fully arrived on mainstream German television, even though German drag star Olivia Jones is a popular guest at celebrity galas and plays dozens of shows in big cities. A German version of "RuPaul's Drag Race," now on Netflix, is not in the works.

"It's insane how much talent there is in Germany. The marketing is just not there. We must push all the artists we have here harder," says Hamisch.

The power of drag queens - who not too long ago were performing mostly in hidden-away bars for the entertainment of a small crowd of fans - is clear from the two-hour show by the TV stars in Berlin.

With dancing, singing, humour and acrobatics, the stars inspire the audience to sing and yell along. "Love yourself as you are," moderator Michelle Visage tells the nearly 3,000 visitors.