The 33 passengers on board were South Koreans. Fifteen people survived uninjured or with only minor injuries.

30 May 2019, South Korea, Seoul: South Korean rescue team leave to Budapest to start a rescue mission after a boat carrying South Korean tourists has drowned in Budapest. According to South Korea's Foreign Ministry, 7 people were dead and 19 others still missing.

Budapest (dpa) - At least seven people drowned and 21 were still missing after a cruiser rammed a smaller sightseeing boat in the Danube, causing it to sink in just seconds, authorities in Budapest said on Thursday.

The smaller boat, Hableany, had 35 people on board - 33 South Korean tourists and two crew members - when it was hit at 9:05 pm (1905 GMT) near the Margaret Bridge in Budapest.

The Hableany had turned in front of the cruiser, the Viking Sigyn, police spokesman Adrian Pal told a news conference in Budapest.

The captain and crew of the Viking - which sails under a Swiss flag with a Ukrainian skipper - were being questioned as witnesses, Pal said without elaborating further.

The skipper and the other crew member of the Hableany were among those missing, he said.

Seven survivors were plucked from the river shortly after the accident. They had to be treated for hypothermia even after a relatively short time in the water, rescuers said during the night.

"The search for missing people is being conducted along the entire flow of the Danube through Hungary," firefighting department spokesman Zsolt Gabor Palotai said. 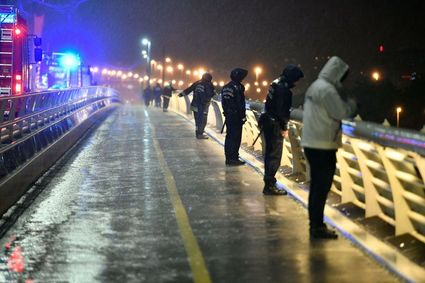 People watch rescue operations from Danube bridge. The reason for the collision with the other vessel, which was bigger than the tourist boat, was not immediately clear.

The 2,850-kilometres river joins the Hungary-Croatia-Serbia border some 180 kilometres to the south.

Seven bodies had been recovered by the morning and two of the victims had been identified, Pal said.

According to Pal, on board there were 22 of men - including the two Hungarian crew - 12 women and a child.

The 27-metre sightseeing boat, able to carry 60 passengers, belonged to the Budapest company Panorama Deck. "All resources are being mobilized to save people's lives," a company spokesman said.

South Korean travel agency Verygoodtour expressed its regret at the accident. The head of the agency, Lee Sang Moo, said it would do everything it could to help the victims and their families.

Yonhap news agency reported that most of the travellers were on a six-country tour in eastern Europe and were between 40-50 years old.