Democrats ramp up calls for impeachment after Mueller breaks silence

"Nothing changes from the Mueller Report. There was insufficient evidence and therefore, in our Country, a person is innocent," Trump tweets 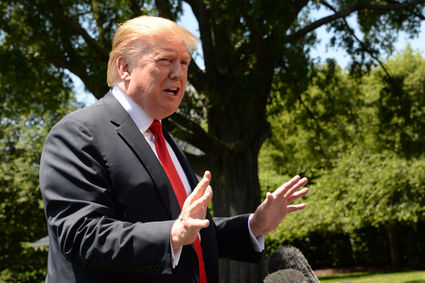 US President Donald Trump speaks on May 24 in front of the White House.

Washington (dpa) - A powerful House Democrat said Wednesday special counsel Robert Mueller might be finished with his investigation but Congress is not, as several prominent party members called for impeachment proceedings to begin against the president.

House Judiciary Chairman Jerry Nadler said Democrats would continue to probe President Donald Trump's actions because it is Congress' responsibility to respond to his "crimes."

Nadler made the comments after Mueller broke his silence on his 22-month investigation into Russian interference in the 2016 presidential election and any ties to the Trump campaign.

Mueller announced the official close to his investigation and reiterated its two key findings: Trump and his campaign did not collude with Russia, and that the report declined to decide whether the White House obstructed investigations.

He said however that if investigators had had confidence that the president clearly did not commit a crime, "we would have said so."

In his statement at the Justice Deparment, Mueller said his hands were tied on indicting the president under long standing policy preventing a president from being charged with a crime while in office.

"Charging the president with a crime therefore was not an option we could consider," Mueller said, lobbing the matter to Congress by saying the Constitution "requires a process other than the criminal justice system to formally accuse a sitting president of wrongdoing."

Nadler said he was up to the task.

"Given that special counsel Mueller was unable to pursue criminal charges against the president, it falls to Congress to respond to the crimes, lies and other wrongdoing of President Trump – and we will do so," Nadler said.

Mueller confirmed that the investigation did not exonerate the president of obstruction of justice, demonstrating that Trump has lied about the special counsel's findings by saying it did, Nadler said.

The congressman did not say whether he would pursue impeachment proceedings against the president, but he said all options are on the table nothing should be ruled out.

Speaker of the House Nancy Pelosi said many of her fellow members of Congress want to impeach the president, adding, "We want to do what is right and what gets results."

Speaking in San Francisco, Pelosi said that "nothing is off the table" but stressed the need for an "ironclad" case to convince Republicas in the Senate "of the path that we have to take as a country."

Some Democratic presidential candidates are calling for Congress to begin impeachment proceedings. Senators Corey Booker and Kamala Harris added their voices to chorus.

The current Democratic frontrunner, former vice president Joe Biden, has not yet reacted to Mueller's statements.

The White House responded by saying it's time to move on.

"We think it's great that he's [closing the office]," White House spokeswoman Sarah Sanders said on Fox News. "It's time to move on and get to work on some of the things that actually matter and impact our country."

In a statement issued earlier she said the report was clear that there was no collusion and no conspiracy between the campaign and the Russians, and the Department of Justice confirmed there was no obstruction.

President Donald Trump's only response was a single tweet.

"Nothing changes from the Mueller Report. There was insufficient evidence and therefore, in our Country, a person is innocent," Trump said. "The case is closed! Thank you."

Mueller, who did not take any questions from reporters, said that if he is asked to testify in Congress he will not say anything more than what is written in the report.

"Beyond what I've said here today and what is contained in our written work I do not believe it is appropriate for me to speak further," he said.