Students at the Lauder Beth-Zion School in Berlin - one of a handful of Jewish schools in Germany - reflect on what it means to be Jewish and part of a tight-knit religious community in the German capital. 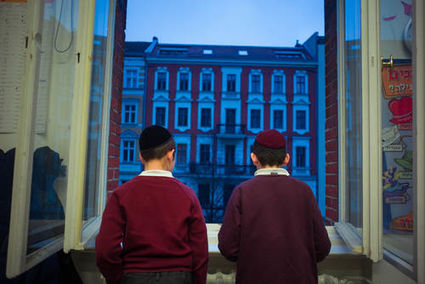 Two students at the Lauder Beth-Zion School in Berlin stand together before the start of the school day.

Berlin (dpa) - The schoolboys who enter the red brick building of the Lauder Beth-Zion School on this chilly winter morning in Berlin are wearing winter hats and baseball caps, just like their peers at other schools in the German capital.

But when the students get inside and take the hats off, they reveal that they're also wearing kippahs, the traditional Jewish skullcaps that they will wear for the rest of the school day.

Rabbi Meier Daus, dressed in the traditional black and white garb of the Orthodox community, sits in a tiny classroom at a table with four boys around the age of 8. They are learning about prayer accessories like the tzitzit - knotted tassels that remind the wearer to recall the commandments of God.

The boys and girls at Lauder Beth-Zion always begin their morning in stillness, with the Siddur - a book of daily prayers - in hand. Later, the children run through the building, tussling in the hallway, playing in the courtyard. A kippah falls to the ground. The boy who was wearing it picks it up.

In a German class, students around the age of 14 recite poems they have written about Berlin. The teens cluster around a bulletin board where the poems are displayed on slips of paper - boys to the right, the girls to the left. No one volunteers to read aloud - all hesitate, until one boy steps forward.

The poem centers on security measures and makes reference to criminal investigators and the German special forces. He reads, in German:

"State visit here / LKA and SEK have everyone in their sights / Adlon Hotel is secured / so that it does not attract attention / Sniper on the roof / Police 24 hours alert ..."

One side of the school borders the Rykestrasse Synagogue, which counts itself among the largest in Europe. Chancellor Angela Merkel spoke there on November 9, 2018 - the 80th anniversary of the Night of Broken Glass that saw pogroms carried out across Nazi Germany. Merkel's speech at the time touched on the lingering traces of anti-Semitism that persist in Germany.

"Unfortunately, we have become almost inured to the fact that every Jewish establishment - synagogue, school, kindergarten, restaurant, cemetery - must be guarded by the police or specially protected," she said.

Students at the Lauder Beth-Zion school have also become accustomed to the guards - the protectors of their levity and freedom - who stand watch at the security checkpoint at the school's entrance.

Lauder Beth-Zion opened its doors in Berlin's Prenzlauer Berg neighbourhood in August 2008 and is considered an especially conservative Jewish school. German and Hebrew are taught from the first grade, English beginning in the third grade. Alongside the normal lesson plan, students are required to spend about 14 hours per week memorizing religious subjects.

Thirteen schools belong to the Central Council of Jews in Germany. The majority are located in Berlin, with others in Frankfurt, Dusseldorf, Hamburg, Cologne, Munich and Stuttgart.

The students at Lauder Beth-Zion have grown up with each other. At some Jewish schools, the students study alongside Christians, Muslims and non-religious students. That's not the case at Lauder, where many of the children know each other through their membership in Berlin's Orthodox community of just under 100 families.

"I like that practically everyone knows everyone here, and I mean really knows," says one 15-year-old boy, who asks to be called Marcel. "I have a few non-Jewish friends, but only online," he says.

The students are together at school from 8 am until 4 pm Monday through Friday. That and the time they spend in the Jewish Orthodox community leaves them with little time to find other friends.

Marcel admits he feels nostalgic for the years he spent in public school. A 14-year-old girl who asks to be called Sara refers to the Jewish Orthodox community as a "bubble."

Sara and Marcel say they feel at home at the Lauder school, but they wish they had more contact with young people with different backgrounds or beliefs.

The younger children at Lauder Beth-Zion say they like to stay within the guarded walls of the school and within their small community.

"Here, everyone is Jewish - everyone knows what is Jewish," Rahel says. "Here you don't have to hide." What does it mean, though - to hide? Rahel's classmate Jakob, for example, doesn't tell his peers at the local sports club that he's Jewish. Other classmates make sure to put a hat on over their kippah - something that many Jewish men and boys in Germany do to avoid problems.

"We are taught to make sure that our children are not immediately recognizable as Jewish children," one of the school's principals says.

The older students are not so worried, or at least they don't say they are.

"I believe I'm currently safe in Germany," Marcel says. He admits that he has also had some bad experiences - during his time at a school in another city, for example, when two classmates and another boy took his hat and spat in it.

"They said I wasn't allowed on their property because I'm Jewish," Marcel says.

Today, Marcel wears his kippah in public openly and has never been attacked or affronted in Berlin. 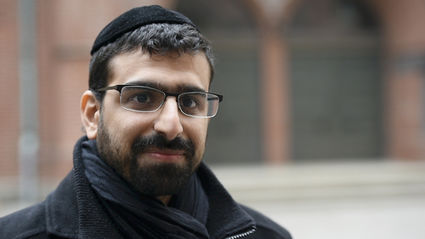 Rabbi Meir Daus is a teacher at the Lauder Beth-Zion School in Berlin.

Sara agrees that she currently feels safe in Germany. The anti-immigration Alternative for Germany (AfD) party, she says, seems to be focused on a campaign against Muslims rather than against Jews. But if things got worse, she says, it would be necessary to leave the country.

"Why do you hate Jews?" a student asks his classmate in English class. The class has just finished listening to a lecture about a book and has started an role-playing exercise: one student takes on the persona of a journalist questioning a Nazi soldier in the beginning of the 1940s.

The boys seem unperturbed - they laugh.

"Why do you hate Jews?" the one playing the journalist asks again.

His fellow actor jumps around the room and answers: "Because I am a dummy!"