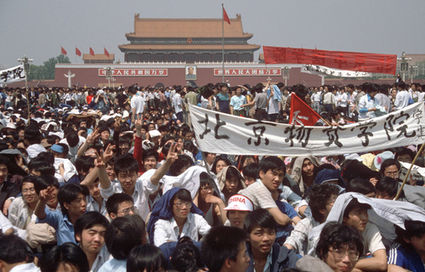 Students protesting on Tiananmen Square in Beijing in 1989. Calls for democracy by students in faraway Beijing helped give impetus to the civil rights movement in East Germany. Just months after the bloodshed on Tiananmen Square, the Berlin Wall came down peacefully.

Beijing (dpa) - Thirty years after a bloody crackdown on students and democracy activists in Beijing's Tiananmen Square, one of modern China's most defining events was set to go unobserved on Tuesday.

However, outside of the mainland, the massacre is officially remembered in Hong Kong and Macau, two former European colonies that returned to Chinese sovereignty in 1997 and 1999.

Hong Kong, an autonomous territory, has held a candlelight vigil annually since 1990. This year's vigil is expected to attract tens of thousands of people.

Richard Tsoi, vice chairman of the Hong Kong Alliance in Support of Democratic Movements in China, which is organizing the event, said many locals remember watching broadcasts of the protests on television.

"I think that the feeling of Hong Kong people is we definitely have the responsibility to carry on the movement," Tsoi said. "We still have freedom in Hong Kong so we need to voice our feelings."

Information about the protest is heavily censored in China, particularly in the annual lead up to June 4, the day in 1989 when weeks of protest were violently brought to an end.

Human Rights Watch reported late last week that authorities have detained rights activists ahead of the anniversary, including former Tiananmen protesters, and forced several to go on "vacation" with government minders.

They have also restricted the movement of several Tiananmen Mothers, a group of women whose children were killed in 1989, and placed some under house arrest, the watchdog said.

Online discussion of the event is also heavily censored in China, including symbolic references to the protests like candles and combinations of numbers relating to the crackdown's date.