During the campaign, he did say that Mexico would pay for the wall. Now we know how. 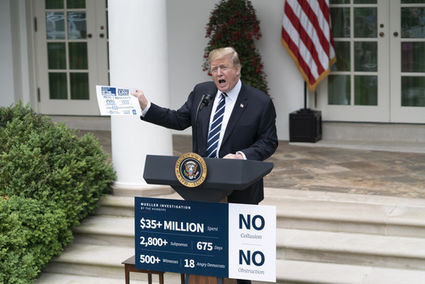 US President Donald Trump speaks during a press conference in the Rose Garden of the White House, Washington DC on May 22, 2019.

Washington (dpa) - President Donald Trump on Thursday announced a 5-per-cent tariff on all goods imported from Mexico to pressure the country into stopping illegal immigrants from entering the US.

In a statement, Trump said Mexico's "passive cooperation" with the flow of illegal immigration was an "emergency and extraordinary threat to the national security and economy of the United States."

The tariff will be imposed on June 10 and be raised to 10 per cent on July 1 "if the crisis persists," Trump added.

The tariff will then be gradually increased "if Mexico still has not taken action to dramatically reduce or eliminate the number of illegal aliens crossing into the the United States."

Trump has frequently expressed frustration over a growing number of migrants at the US border with Mexico. He has threatened to shut down the border with Mexico entirely and declared a national emergency to obtain funding to build a wall along the US-Mexico border.

His surprise announcement comes as the US, Mexico and Canada try to push their updated free trade agreement into effect.

Mexican President Andres Manuel Lopez Obrador said Thursday his country will send the agreement to the Senate to for ratification,

Meanwhile, US Vice President Mike Pence was in Canada for talks with Prime Minister Justin Trudeau discussing the deal. Canada has also started the ratification process this week.

It was not immediately clear if the updated trade deal would be affected by Trump's move. US trade with Mexico amounted to 671 billion dollars in 2018.