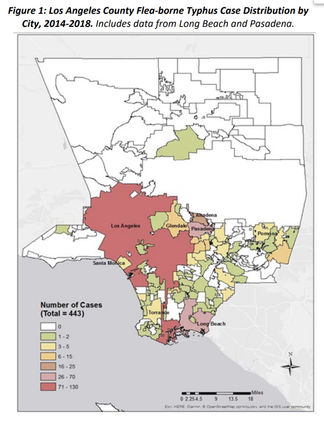 There is a concern that they could be transmitted from the animals to people sleeping in the park, by way of fleas. Another concern is shelter workers, who could contract disorders from animals.

The County does test rats in parks in San Gabriel and Orange County, but LA County is so overwhelmed with more deadly diseases that they have been focusing on those areas, said a spokesman for the Department.

A person contracting typhus, and his doctors, might believe that he or she has a bad flu, and not report it to the authorities as typhus, said the spokesman. "Cities need to do whatever they can to reduce the trash and food in the parks that attracts the rats," he added.

One can contract typhus from the flea excrement on an animals comb, he said.

Not all fleas carry typhus, but any of them could. So the Los Angeles County Dept of Public Health has posted a banner for residents to protect themselves http://publichealth.lacounty.gov/media/typhus/index.htm

Signs and Symptoms of Flea-borne Typhus

Many people with typhus may have:

Loss of appetite, nausea or vomiting

Rash on the chest, back, arms, or legs

If you have these symptoms, call your doctor. Typhus can be treated with antibiotics. Signs of typhus can start 6 to 14 days after having contact with the infected flea.

Keep fleas off you and your pets

Use flea control products on your pets. 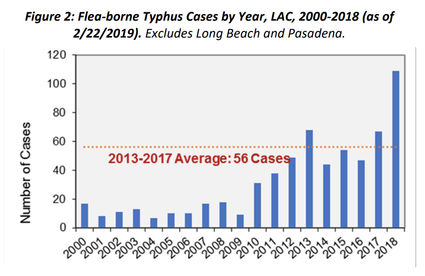 Spray yourself with EPA-registered insect repellent to avoid flea bites.

Use EPA-registered insect repellent labeled for use against fleas.

Avoid being near wild or stray animals

Do not leave pet food outdoors.

Do not provide food or water for wild animals.

Close up crawl spaces and openings under home where rats and stray animals can sleep, hide, or find food.

Protect yourself by wearing gloves and a mask when cleaning these areas. Wash your hands when you're finished.