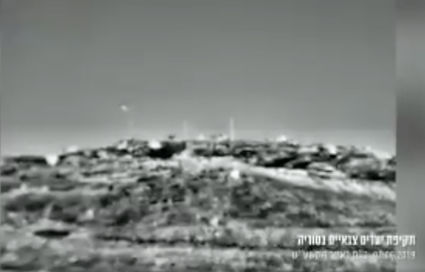 Tel Aviv (dpa) - The Israeli army said on Sunday it struck military targets in Syria in response to two rockets launched from the country towards Mount Hermon in the northern Golan Heights.

One of the rockets fired earlier from Syria landed in the Israeli-controlled territory, according to a rare statement released by the army, confirming that it had struck in Syria.

The Syrian news agency SANA reported that three soldiers were killed and seven others injured in the strikes, mounted early Sunday in south-western Damascus and Quneitra in the south.

The agency added that Syrian air defenses had repulsed a "Zionist [Israeli] aggression," without reporting details.

The Israeli strikes targeted areas near Damascus hosting military positions of Iranian forces and the Lebanese Hezbollah movement, both allied with Syria, the Syrian Observatory for Human Rights, a war monitor, reported.

The Israeli army said it struck a number of military targets belonging to the Syrian Armed Forces with fighter jets and attack helicopters.

"Amongst the targets were two Syrian artillery batteries, a number of observation and intelligence posts on the Golan Heights, and an SA-2 aerial defence battery," the statement read.

During the strikes, it added, an Israeli aerial defense system was activated due to Syrian anti-aircraft shooting.

Prime Minister Benjamin Netanyahu said Israel "will not tolerate firing on our territory and we respond with great force to any attack against us."

SYRIA: IDF bombed several military targets belonging to the Syrian army, including two artillery batteries, a number of observation and intelligence posts on the Golan Heights, and an SA-2 air defense battery, in response to two missiles that were fired towards #Israel.

An area of Mount Hermon is part of the land occupied by Israel in the 1967 Six Day War. Syria said Sunday it is determined to "liberate" Golan from Israel. But it is more probable that Syrian attacks on Israel, are in retaliation to aid and comfort Israel has offered rebel groups. This includes both humanitarian aid, medical treatment of Syrians including rebel fighters, and weapons. Netanyahu in January admitting aiding rebel groups, according to the Times of Israel.

"Syria will liberate its lands occupied by Israel or terrorists by all available means," an unnamed official at the Foreign Ministry said, according to SANA.

Israel has said it will not tolerate Iran seeking to establish permanent military bases in Syria. Iran and Hezbollah have been major allies of Syrian President Bashar al-Assad since the outbreak of the Syrian Civil War in 2011.

On Monday, Israel's army attacked a Syrian position near the town of Qunaitra following a bombardment from Syria, killing a soldier and wounding another, according to official sources.

The Israeli army said it had responded to an attempt by the Syrian army to hit an Israeli plane. Syrian and Iranian military facilities in the war-torn country have been hit several times by similar strikes in the past few months.