"I think [Brexit] will happen," Trump said, saying May had "done a very good job" in the negotiations. 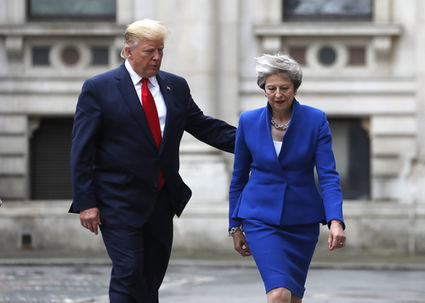 "Our nations have more than 1 trillion dollars invested in each other's economies," Trump told reporters after talks with May on the second day of his three-day state visit to Britain.

"As the UK makes preparations to exit the EU, the US is committed to a phenomenal trade deal between the US and the UK," he said.

"There is tremendous potential in that trade deal, I say probably two and even three times what we're doing right now."

May failed to persuade British lawmakers to back the Brexit deal she negotiated with Brussels. She will step down as leader of her Conservative Party on Friday.

Conservative eurosceptics want a new party leader to prioritize liberal free-trade deals with non-EU economies even it means Britain leaving the EU with no withdrawal agreement.

But May insisted on Tuesday that Britain must still "leave the European Union in an orderly way, with a deal."

"Once we're out of the EU, we will be able to do what we've talked about today," she said alongside Trump, referring to discussions on future trade between the two nations.

"I think [Brexit] will happen," Trump said, saying May had "done a very good job" in the negotiations.

"She has got it, in a sense, that deal is teed up. I think they have to do something," he said.

"Perhaps you won't be given the credit you deserve if they do something, but I think you deserve a lot of credit, I really do," Trump told May.

He said he was also optimistic that the two nations will reach a deal on market access in Britain for the Chinese telecom giant Huawei and its 5G technology, which will enable London and Washington to continue intelligence-sharing operations.

"We are absolutely going to have an agreement on Huawei and anything else," Trump said. "We will be able to work out any differences."

Opposition lawmakers raised concerns after US ambassador Woody Johnson told the BBC on Sunday that all sectors of Britain's economy, including the National Health Service (NHS) and agriculture, would need to be "on the table" in negotiations on a new trade deal.

"When you're dealing in trade, everything is on the table, so NHS or anything else, a lot more than that, but everything will be on the table, absolutely," Trump said Tuesday when asked about Johnson's comments.

Speaking to the BBC earlier Tuesday, International Trade Secretary Liam Fox said the NHS and food safety would be protected under any trade deal.

Trump and his family enjoyed a royal welcome from Queen Elizabeth II, including a state banquet at Buckingham Palace, on Monday at the start of his visit.

He thanked the queen on Tuesday for the "lovely dinner," saying the royal welcome was "very, very special."

Scores of anti-Trump protesters gathered outside Buckingham Palace during the royal banquet, while thousands more joined a Together Against Trump rally in central London on Tuesday.