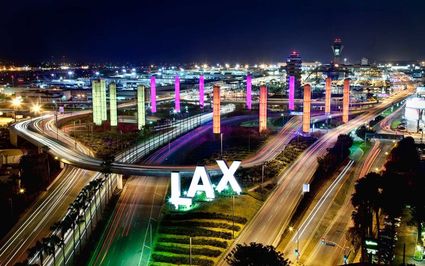 LAX Artwork is not lit up Wednesday night, as a power outage caused delays

A power outage, or series of outages, caused the evacuation of terminals beginning on Wednesday at 6:20 pm.

Power crews were told to focus on Terminals 8 and 9. Several terminals saw their emergency backup systems triggered, which created a dim light for some passengers.

Planes began to take off again at 11 pm on Wednesday night. But TSA cleared the Southwest terminal. Travelers in Terminal 1 were evacuated just after 6 a.m. and were re-screened by the Transportation Security Administration after officials determined that “prohibited items” had made their way into the airport during Wednesday night’s outage, said the LA Times.

“An airline granted passengers whose flights were canceled access to their checked bags, resulting in the unintentional introduction of prohibited items into the secure area at the airport,” said Lorie Dankers, a spokeswoman for the TSA. “Out of an abundance of caution, TSA leadership at LAX made the decision to re-screen the passengers.”

It is not clear what type of prohibited items were identified.

Once the terminal was cleared of passengers, airport police conducted a security sweep of the area. Officers used dogs to search for any prohibited items, said Heath Montgomery, an airport spokesman.

LAX is in the Westchester district of the city of Los Angeles, California, 18 miles southwest of Downtown Los Angeles, with the commercial and residential areas of Westchester to the north, the city of El Segundo to the south and the city of Inglewood to the east. Owned and operated by Los Angeles World Airports (LAWA), an agency of the government of Los Angeles, formerly known as the Department of Airports, the airport covers 3,500 acres of land, LAX has four parallel runways.

In 2018, LAX handled 87,534,384 passengers, making it the world's fourth busiest and the United States' second busiest airport following Hartsfield-Jackson Atlanta International Airport. As the largest and busiest international airport on the U.S. West Coast, LAX is a major international gateway to the United States, and also serves a connection point for passengers traveling internationally. The airport holds the record for the world's busiest origin and destination airport, since relative to other airports, many more travelers begin or end their trips in Los Angeles than use it as a connection. It is also the only airport to rank among the top five U.S. airports for both passenger and cargo traffic.

LAX serves as a hub or focus city for more passenger airlines than any other airport in the United States. It is the only airport that four U.S. legacy carriers (Alaska, American, Delta, and United) have designated as a hub and is a focus city for Air New Zealand, Allegiant Air, Norwegian Air Shuttle, Qantas, Southwest Airlines, and Volaris. While LAX is the busiest airport in the Greater Los Angeles Area, several other airports, including Hollywood Burbank Airport, John Wayne Airport, Long Beach Airport, as well as Ontario International Airport, also serve the area.