The high-class perks of premium travel: When the plane waits for you #Lufthansa, #Emirates

Even above the clouds, not all airline passengers are equal: The customer who pays the most receives the best service, high-quality meals and fanciest cocktails. Are these high-class perks dying out? 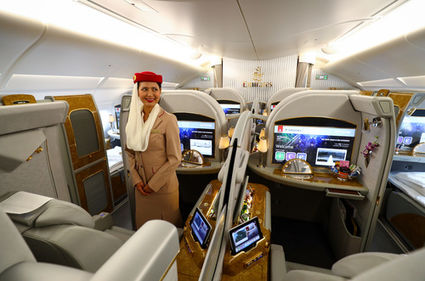 An Emirates flight attendant in the first-class cabin of an Emirates Airbus A380.

Whether on board or on the ground, the German airline strictly separates its four booking classes. The same is true for its rivals.

While economy-class passengers sit in cramped rows at the back of the plane, in the front, it's all about individualized luxury for the best-paying clientele. In between comes premium economy and business.

With Lufthansa, anyone who travels often can accumulate "status miles" to earn the rank of Frequent Traveller or Senator, or they become a member of the "Honorary Circle," or "HON." These valued customers can use the facilities on the ground that Lufthansa maintains for its first-class passengers in various cities. But in the air, only first-class ticket holders get that level of service.

In Frankfurt Airport's first-class terminal, passengers can avail of Michelin-star cuisine, the finest cigars, a variety of wines and more than 130 different whiskeys. In addition, there are facilities for working, day beds and bathrooms, all discreet and luxurious.

Frequent flyer Torsten Gruender enjoys the advantages of his HON status, especially in crisis situations or when there's very little time between connections. Gates that were already closed have been reopened several times for him, or the connecting plane has waited until he reaches it by limousine shuttle before taking off.

Exclusive snacks, fresh exotic fruits or the almost endless choice of drinks in the lounges are just minor perks.

"While many things are no longer possible for everyone else, for us those things are still possible," he says.

The HON customer appreciates the attention paid to his concerns and things like the convenience of a shower after a long-haul flight.

On the other hand, the IT outsourcing expert is increasingly dissatisfied with the performance of the Lufthansa booking software, which collapses more and more frequently following a recent update.

His biggest gripe is that he would like to see Bundesliga football on his flights; at the moment, he can only watch Premier League. The German league is not offered by program providers, says Lufthansa.

Premium guests are very valued by the airlines. According to analyses by the airline association IATA, ticket prices in the premium classes, including business, have come under significantly less pressure than the cheaper tickets since 2011.

Airlines won't reveal the exact price ratio between the individual booking classes. Aviation consultant Gerd Pontius assumes that a first-class passenger can bring the same profit as four business customers or 20 economy seats – that doesn't include the special offers for first-class seats that have started appearing more often.

However, the great economic importance of this small group of customers has increasingly become a risk for the airlines.

"In the case of smaller aircraft, the sale of the first-class seats could decide whether an individual flight made a profit or a loss," says Pontius. "The airlines have become more cautious and now only offer the product on routes where they can expect steady demand."

According to Lufthansa, first-class seats can still be booked on every third long-haul route, while other companies such as the Dutch flagship carrier airline KLM have long since abolished the top class.

"There's the question of where all the sheikhs have actually gone," says Hamburg aviation expert Cord Schellenberg, referring to the large first-class providers Emirates and Etihad Airways from the United Arab Emirates. Very wealthy customers are increasingly flying their own or leased private jets, even over long distances.

"This is true in all regions of the world and also for top celebrities, who have always been an important target group for the airlines' first-class service," says Schellenberg.

And for senior executives, booking first class is becoming more and more difficult due to their companies' travel guidelines. To fly in first class is not only simply too expensive for many companies, but also no longer makes sense because of the bad image it projects. 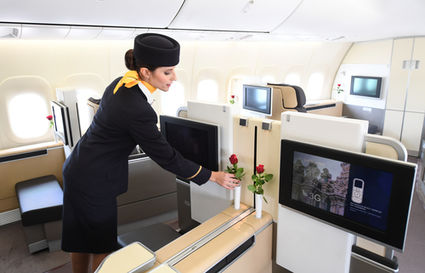 Is first class dying out? Lufthansa certainly intends to maintain its flagship product, and it points to a growing demand in recent years.

Pontius believes that first class will survive in some niche markets. But things are certainly shifting: "The competition for quality is being held in business class. This is where the biggest investment is taking place by individualizing the product and increasing comfort."

Qatar is heading in the right direction with its flexible offer of combining two or four business seats into small cabins, he says.

"More privacy is something that people in business class are certainly willing to pay for."