Emergency responders extinguished a fire and dealt with a fuel leak from the helicopter caused by the crash. 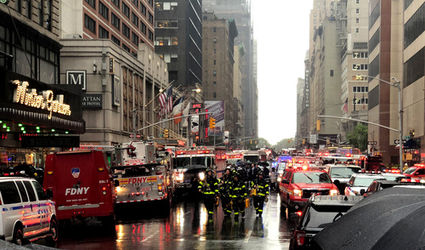 New York (dpa) - One person died on Monday when a helicopter crash-landed on the roof of a building in Midtown Manhattan, New York city's fire department said.

Officials said firefighters pumped water over 200 yards to reach the top of the 51-story building after the hard landing on the roof of a building on 7th Avenue, not far from Times Square and the southern part of Central Park.

The entire building, which houses several companies, was evacuated.

Preliminary information showed only the pilot was on board, the Federal Aviation Administration (FAA) said, but the city's fire department was unable to confirm the identity of the deceased, or give details about other injuries or how many people were in the helicopter.

New York City Mayor Bill de Blasio said there was no ongoing danger, and that the casualty was presumed to be the pilot.

The fire department tweeted that it was a "crash landing." New York's local CBS TV station reported that the building did not have a helipad.

Images tweeted by the fire department showed debris and bent metal railings from the spot where the helicopter appeared to have hit and crashed.

Emergency responders extinguished a fire and dealt with a fuel leak from the helicopter caused by the crash.

Nathan Hutton, who works for BNP bank, was at work when the helicopter landed, and said the impact felt like the building shifted.

It felt "like an earthquake," Hutton said. Alarms went off to call for an evacuation of the building minutes later, he said.

Morgan Aries, who works for UBS on the 14th floor, said he was in his chair when he felt what he described as a "tremor."

Five to 10 minutes later he and his colleagues were sent to the stairs to get out of the building, but they didn't know it was an aircraft that hit the building until they got outside, which took some time due to congestion in the stairwell, he said.

"It was a little nerve-wracking in the stairwell because no one knew what was going on but we did feel the tremor so that's what made it a little more surreal," Aries said.

New York's Governor Andrew Cuomo was at the scene, and said the helicopter made a forced landing. Cuomo and Mayor de Blasio both said there was no indication that it was a terrorism-related incident.

US President Donald Trump tweeted that he had been briefed.

The helicopter landed in the afternoon in rainy, grey weather with poor visibility.

New York's police commissioner James O'Neill said the authorities believe the helicopter is privately owned and used for executive travel, and was most likely going back to its home in New Jersey after taking off from the east side of Manhattan.

It crashed 11 minutes later, O'Neill said, adding that it was unclear why it was flying in such poor weather conditions.

The National Transportation Safety Board (NTSB) will be in charge of determining what caused the accident, the FAA said in a statement.