A Devout Muslim Advocates for Gender Equality, Freedom of Conscience and Expression. And People Hate Him 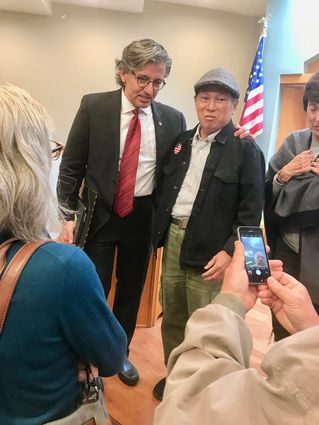 Dr. M. Zuhdi Jasser and a fan who happens to be a Chinese Muslim, of the Uigher ethnicity

Normally, there is one security guard standing outside the door of Kehillat Ma'arav Synagogue in Santa Monica. For this Sunday morning lecture, however, there were two guards. The reason: the speaker was Dr. M. Zuhdi Jasser, a medical doctor and founder of the American Islamic Forum for Democracy (AIFD).

Jasser, a devout Muslim, began AIFD in order to advocate for Muslim communities around the world to embrace the principles of gender equality, freedom of conscience, and freedom of speech and expression.

This may hardly seem like a program that should engender bitter enmity and death threats - but it most certainly does. Jasser understands full well that he is bucking what he calls "a deep, fossilized establishment." That establishment is Islamism, the ideology that the religion of Islam should be the basis of government. In Islamism, the Koran should be every country's constitution, and Sharia law should be the law of the land.

Although Jasser began AIFD after the terrorist attacks on 9/11, he had been thinking such a movement was necessary for several years prior. That was when, in 1995, he attended a dinner put on by the prominent Islamic Society of North America (ISNA). At that time, Jasser was still in the United States Navy, where he served for 11 years, and had attended the dinner to present a medical paper with a colleague. He was shocked to hear the keynote speaker advocate for the destruction of the U.S. Constitution and, basically, the overthrow of the secular government. Though he suspected he was not in friendly territory, he stood up in his Navy whites and told the crowd that though it was a free country and the speaker could say what he pleased, his call to action was sedition. Jasser became further convinced that someone needed to take action against the Islamist establishment when no one stood up to agree with him - though many thanked him afterward. Clearly, people advocating for assimilation into American values felt cowed by the larger and louder Islamist establishment.

Well over 200 people came to Jasser's lecture on Sunday, which was advertised in the Jewish Journal and sponsored by an anonymous donor. Those who came may have been shocked - though most were clearly delighted - to hear a Muslim speaker support the State of Israel and decry Muslim anti-Semitism.

"I'm glad Ilhan Omar and Rashida Tlaib were elected," Jasser told the audience. His reason? He believes these two newly elected Democrats in the House of Representatives will expose to all Americans the deeply entrenched anti-Semitism and anti-Americanism in Islamism. Ilhan Omar has used anti-Semitic tropes of Jews using money for power in her speeches. She has also been shown in videos mocking Americans' horror of Al Qaeda, the terrorist organization that carried out the 9/11 attack that killed nearly 3,000 people. Tlaib prominently posted a photo of her new congressional office with a Post-It marked "Palestine" placed over Israel on a map of the world.

"Islamophobia should not be a word," Jasser said. He explains that the word "Islamophobia" anthropomorphizes a religion. It also assumes that one cannot legitimately disagree with or criticize the religion. 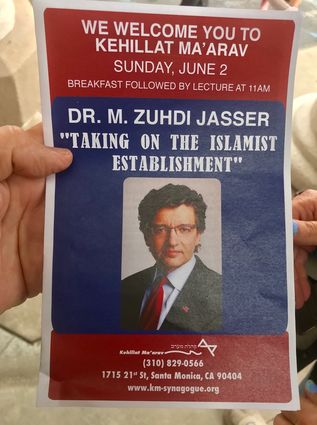 Well over 200 people came to Jasser's lecture on Sunday, which was advertised in the Jewish Journal and sponsored by an anonymous donor

AIFD's core mission is to separate mosque and state. Jasser has no quarrel with the religion of Islam. Quite the contrary. He is devoted to Islam, attends mosque regularly (though he has been publicly attacked by the cleric there), and grew up studying the Koran with his father, who wrote a translation. Unsurprisingly, his advocacy of universal and American principles of separation of church and state and basic freedoms has caused him to be attacked by those in the establishment he seeks to dismantle. Hope Not Hate, the British counterpart of the Southern Poverty Law Center, attacked him in 2015. It appears to be a hallmark of anti-hate groups to attack the people who are actually opposed to hate. The SPLC attacked Jasser's colleague, Maajid Nawaz, founder of the British anti-Islamist group, the Quilliam Foundation. The SPLC apologized and paid several million dollars to Nawaz and the Quilliam Foundation after they were sued for defamation. The Hope Not Hate group quietly removed Jasser from their report attacking alleged haters.

During the question-and-answer session following the lecture, Jasser was repeatedly asked if he didn't think his task is impossible. Jasser's response was that of a true healer. He said no matter how terrible the prognosis, he would never tell patient he was going to die. "Anything worth doing is going to be difficult," he said.