Temple Emmanuel conducts a reading of "The Cat who lived with Anne Frank," in honor of her 90th birthday. 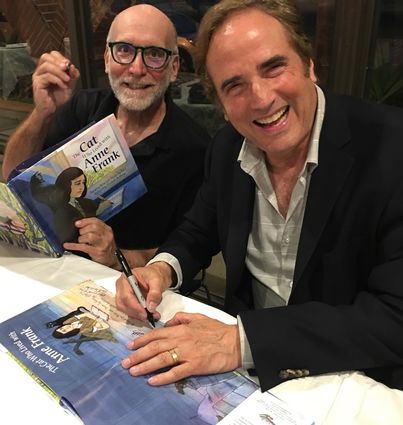 In 1996 Steven Rubin had the idea for retelling this tale in another media. His friend David Miller was a knowledgable of children's literature, had a poetic nature and they worked well together.

Originally they thought of making an animated movie, but 3 years ago they went back to the idea of writing it as a book.

David was in charge of production of the Criterion Collection which invented an the interactive sound track for classical feature films.

Steven is an expert of James Bond movies and is currently working on the 4th encyclopedia of Bond films.

Mouchi is Peter's cat, who with his family hid with the Franks from the Nazis, in occupied Amsterdam. Nine adults and a cat survived in the "secret annexe", in claustrophobic conditions from 1942-1944.

Only Otto Frank, Anne's father survived, and discovered the diary after the war ended. Anne was murdered at Bergen Belson in 1945.

This new versions was introduced at the Museum of Tolerance on Holocaust Day in February 2019.

The authors, both Jewish, feel strongly about the book's message. "It is a story in context to history." and might be antidote via education to hatred.

Millie Perkins played Anne, her sister Margot was played by Diane Baker in the movie, which was released in 1958. Both women read from the book to a captive audience and answered questions at Temple Emmanuel last week.

The evening ended with a book signing and refreshments.

Temple Emanuel and ChaiVillageLA conducted a book reading of The Cat Who Lived with anne frank, a children’s picture book co-authored by David Lee Miller and Steven Jay Rubin.

The reading on June 12, 2019 at Temple Emmanuel in Beverly Hills, was performed by co-stars of the original 1959 movie, The Diary of anne frank: Millie Perkins and Diane Baker.

anne frank would be celebrating her 90th birthday this year.

Wikipedia: Annelies Marie "Anne" Frank was a German-born Dutch-Jewish diarist. One of the most discussed Jewish victims of the Holocaust, she gained fame posthumously with the publication of The Diary of a Young Girl (originally Het Achterhuis in Dutch; English: The Secret Annex), in which she documents her life in hiding from 1942 to 1944, during the German occupation of the Netherlands in World War II. It is one of the world's best known books and has been the basis for several plays and films. 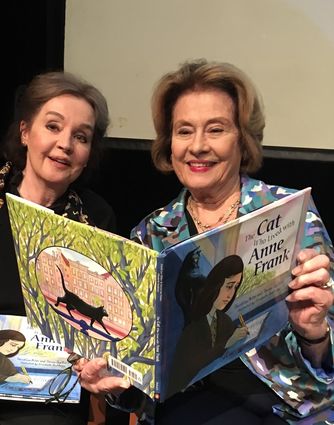 Born in Frankfurt, Germany, she lived most of her life in or near Amsterdam, Netherlands, having moved there with her family at the age of four and a half when the Nazis gained control over Germany. Born a German national, she lost her citizenship in 1941 and thus became stateless. By May 1940, the Franks were trapped in Amsterdam by the German occupation of the Netherlands. As persecutions of the Jewish population increased in July 1942, the Franks went into hiding in some concealed rooms behind a bookcase in the building where Anne's father, Otto Frank, worked.

From then until the family's arrest by the Gestapo in August 1944, she kept a diary she had received as a birthday present, and wrote in it regularly. Following their arrest, the Franks were transported to concentration camps. In October or November 1944, Anne and her sister, Margot, were transferred from Auschwitz to Bergen-Belsen concentration camp, where they died (probably of typhus) a few months later. They were originally estimated by the Red Cross to have died in March, with Dutch authorities setting 31 March as their official date of death, but research by the anne frank House in 2015 suggests it is more likely that they died in February.