The Wedding Singer at the Morgan Wixson Theatre 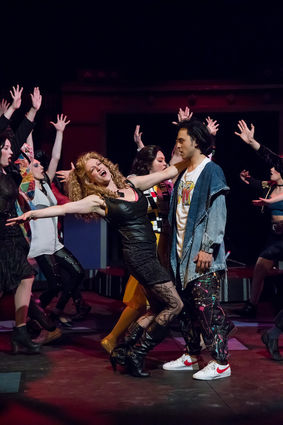 A raucously enthusiastic "The Wedding Singer," adapted from the Broadway musical and hit movie opened June 29th at the Morgan-Wixson theatre.

A cast of 28 multi racial singers and dancers told the story of Robbie Hart, NJ's favorite wedding singer in the 1980's. After he is left at the altar, he vows to make every wedding he performs at as disastrous as his own. He subsequently meets a soft hearted waitress who helps him with his song writing, but she is soon to be married to a greedy Wall Street bond salesman. Robbie's job is to produce a stellar performance as a wedding singer to win her heart

The first act is set in NJ, the second in Las Vegas where the waitress and her avaricious boy friend are to be married.

and tender emotions. Sammy (Doug Kiphut, George (Deonte Allen) and Glen(Steve Weber) are Robbie's bandmates with the exaggerated songs/gestures the times. Rosie(Miriam Billingham) adds wisdom and broad humor to help her grandson through his dilemma.

Minimal set pieces are used, the Murphy bed adds a dash of "olden times" to the stage.

The costumes are dazzlingly colorful.

The show is fast moving, with many laughs and some tenderness.

Images courtesy of the Morgan Wixson

The Wedding Singer is Directed by Kristie Mattsson 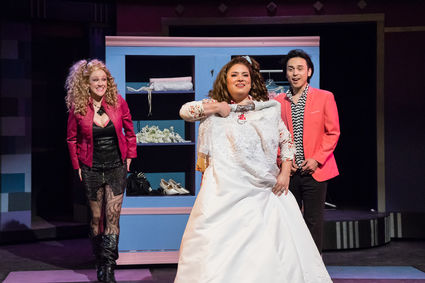