A fine ensemble production of actors in a drama about life. "Death of a Salesman" at the Ruskin Group Theatre in Santa Monica 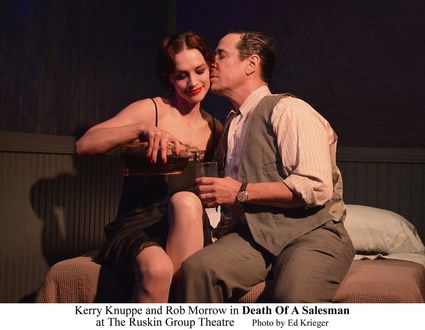 Kerry Knuppe and Rob Morrow in Death of a Salesman at the Ruskin Group Theatre.

Deception, ambition, illusions, reality all play a part in the" Death of a Salesman" at the Ruskin Group Theatre in Santa Monica . Set in New York and Boston in 1949, the action takes place in the last 24 hours of Willy Loman's life.

Willy Loman (Rob Morrow) ,after 35 years as a salaried salesman, is demoted to working for commissions . He is determined to keep up appearance to his supportive wife (Lee Garlington) and his sons. In the opening scene, has just returned from driving around New England, in search of sales. Depressed by his inability to earn money, he had made earlier suicide attempts and has hidden a rubber tube in the basement of his home.

His mind confuses the past with the present. He remembers some of his colleagues and the old boss who hired him, but other facts are fuzzy. A football game his sons played in are clear, but an affair 15 years ago is not. Other incidences in his past are blended with current events.

Biff, the oldest son (Robert Adamson) and Happy, the youngest one (Dylan Rourke) are unhappy in their jobs and talk about buying a ranch out West and working together .

Willy tries to imbue in both of the boys the salesman code of ethics: Smiles, who you know, your appearance. In an effort to help Biff , he sends him to a previous employer. The owner of the company does not remember Willy, since he was merely a shipping clerk.

He then goes to his boss Howard(Darrin Hickok) to discuss the possibility for an office job, only to be fired . This news he tells this sons at what was to be a celebratory dinner, only to be interrupted by Biff's dalliances with a prostitute .

The next day Willy asks his friend Charley(Jack Merrill) for a loan. He is offered money and a job but refuses both.

15 years ago Willy had an affair and Biff recently finds out about it. He wants nothing to do with his father and his mother issue an ultimatum.

Criticizing their sons for abandoning Willy, they must respect him now or leave their house. Biff decides to stay in NY.

In the dark he begins to plant a vegetable garden and in the end, overcome with where his life has gone and his profound sense of failure , Willy kills himself.

The last scene is at the cemetery with Charley, one of his co workers and Willy's family. Charley laments Willy's illusions on the life of a salesman. His wife tearfully admits that she has finally paid off the mortgage, and now there is no one to live in the house.

Willy is played with the stooped posture of an old man, filled with inner conflicts and outer pretensions. His wife recognizes that Willy is in trouble and she cannot help him. Both sons have the brawn and physicality of young athlete and explosive tempers.

What makes this play so strong is the superb writing of the characters and their interactions, their illusions, their movements from the past to the present and their failures.

It is fine ensemble production of actors in a drama about life. 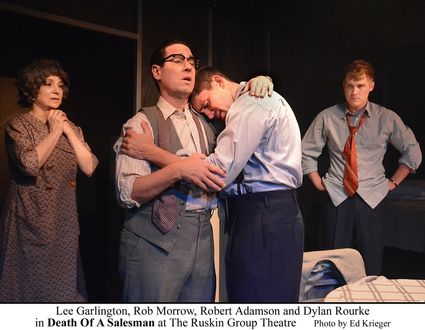 Lee Garlington, Rob Morrow, Robert Adamson and Dylan Rourke in Death of a Salesman at the Ruskin Group Theatre.

"The Loman family struggles with the same social, economic and environmental pressures that we seem to keep experiencing in our own lives. Unchecked development and expansion, the urge to keep up with our neighbor's luxury and convenience purchases, a need to keep up appearances, and a deep anxiety over our children's prospects for their futures. It's all so ever-present in our American culture that we may not even notice. Yet, at the center of this story is the deeply personal human tragedy of Willy Loman and his family. What could be more needed today than a story that gives voice to our living experience in such a powerful way? " Mike Reilly; Director