Police Arrest 4 Suspects, three of them juveniles, after search of Santa Monica Thursday 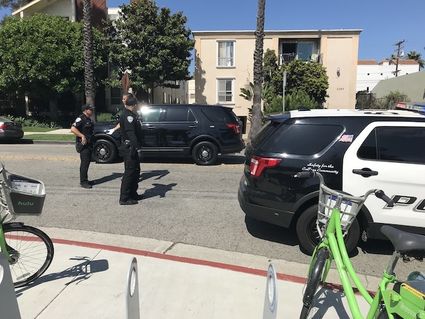 Police search Reed Park for a suspect after robbery at jewelry store on Montana Avenue in Santa Monica.

The owner of a jewelry in Santa Monica was hit with a sledgehammer while watching a robbery at his store Thursday, officials said. The robbery occurred about 2:35 PM at the store along the 1200 block of Montana Ave.

One of the suspects went into the store with his face in a mask, and smashed a jewelry display case with a sledgehammer

The owner intervened I was able to push the suspect out of the store, police said. The second suspect, also caring a sledgehammer, approach the owner and hit him with it.

The two suspects fled in an awaiting car, meaning they had an accomplice. Witnesses called police and provided responding officers with a description of the vehicle the suspects were in.

Police saw the car in the 1100 block of Wilshire Boulevard, stop the car and took three people into custody without incident, police said. A fourth suspect who is not able to get away during initial crime was eventually found near Euclid Avenue and Idaho Avenue.

Three of the four suspect were described as juveniles. The adult was booked on suspicion of conspiracy to commit a crime, Robbery and assault. Police have not identified any of the suspects. They released no further details about the incident on Friday.

On August 15, 2019 at about 2:37 pm, officers responded to a call of an Armed Robbery happening at Heist Jewelry in the 1200 block of Montana Avenue.

A suspect wearing a mask was holding a sledgehammer when he entered into the store and smashed a jewelry display case. The owner immediately intervened and was able to push the suspect outside of the store. A second suspect carrying a sledgehammer approached the owner and struck him with it. The owner sustained minor injuries from the attack. The suspects fled the area in an awaiting car. Witnesses called the 911 communications center providing information on the suspect's vehicle and last direction of travel. 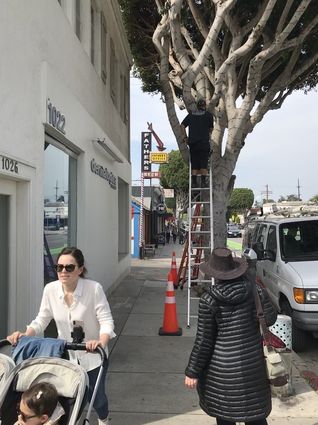 Screenshot of a video posted on Citizen.com

Santa Monica Police officers immediately located the car in the 1100 block of Wilshire Blvd. A felony traffic stop was conducted on the car and all three suspects were taken into custody without incident. A fourth suspect who did not make it in time to the get away car was located in the area of Euclid and Idaho. Evidence of the crime was found and taken into police custody.