Dead of the Dead Mask Robber gets away with it. 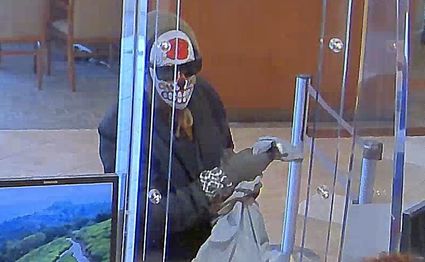 On September 10, 2019 at approximately 9:51 am, the Santa Monica Police Department responded to the Wells Fargo Bank located at 900 Montana Ave regarding an armed robbery. The suspect who was heavily dressed in dark clothing consisting of a hoodie, gloves and a white "Day of the Dead" type of mask entered into the bank carrying a long barreled weapon and demanded money.

The suspect received between three to five thousand dollars and left the location. The suspect was last seen jumping a wall to the rear of the bank and in the 800 block of 9th Street. Santa Monica Police Department were on scene within minutes and set up a perimeter based on information provided by witnesses and residents in the area.

After an extensive search of the area, the suspect was unable to be located.