Channeling the Big Lebowski: A Visit to the Sheats-Goldstein Residence.

The Sheats-Goldstein Residence was built long ago but remains ahead of its time. 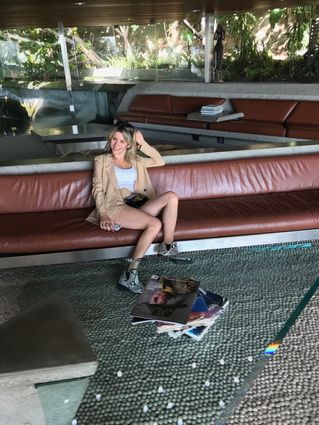 The Dude Abides: The lovely Barbara R. on the very couch where Jeffrey Lebowski once drank a white Russian mixed by Jackie Treehorn. At the Sheats-Goldstein Home.

The Sheats-Goldstein Residence was built long ago but remains ahead of its time.

Designed by noted architect John Lautner, it commands a view of the Los Angeles Skyline that it shares with other houses on the hill. On the other hand, Jimmy Goldstein, who purchased the residence circa 1970, graciously opens his home to students.

Tours are by appointment, and only to architecture students at UCLA. So be sure to take the UCLA Extension course with Architecture Professor Eleanor Shrader.

You're probably familiar with the house from the scene in the Big Lebowski where the Dude meets pornographer Jackie Treehorn. I've probably seen that movie 1000 times. It has been also featured in movies such as Charlie's Angels and Bandits as well on television in Southland.

It's also prominently featured during the first season of Snowfall on FX. The home's popularity with celebrities (and Jimmy Goldstein's noteworthy hospitality, has made it a popular location for numerous photo shoots, including the cover of the November 2014 issue of Vanity Fair featuring Jennifer Lawrence.

It has also served as the backdrop and inspiration for music videos as well as private parties for Snoop Dogg, Calvin Harris, G-Eazy, Rihanna, Lana Del Rey, among others.

Homeowner James Goldstein never married, saying "I don't believe in marriage." He has directed that upon his passing, the house will go to the Los Angeles Museum of Art.

From Wikipedia: The home was originally designed and built for Helen and Paul Sheats and their three children. Helen, an artist, and Paul, a university professor, had previously commissioned Lautner for the 1948-1949 Sheats Apartments project located in Westwood adjacent to UCLA.

There were two subsequent owners before a businessman, James Goldstein, purchased the residence in 1972, in a state of some disrepair. No walls existed in the living room, and much of the concrete had been painted green. 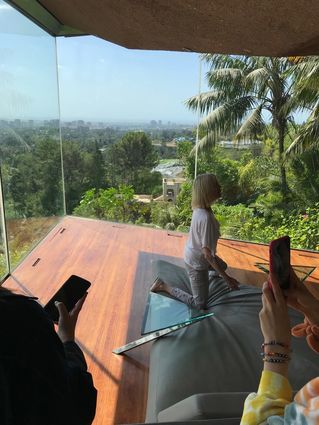 Docent Roberta in a Living Room. Lautner believed there should be no separation between the exterior and interior of a home, and took full advantage of the commanding views.

Goldstein commissioned John Lautner to work on the transformation of the house; a series of remodelings that would encompass the entire house over a period of more than two decades. Goldstein worked with Lautner until the architect's death in 1994 on what they called "perfecting" the house.

The Sheats Goldstein Residence is one of the best known examples of John Lautner's work; he designed not only the house, but the interiors, windows, lighting, rugs, furniture, and operable features.

The house is extensively detailed, and the range of the architect's work is visible through the different stages of the re-mastering. All of the furnishings enhance the house and are completely related so that the aesthetic of the forms is a function of the whole.