Entire community is invited to attend the annual festival of booths, commemorating the Exodus 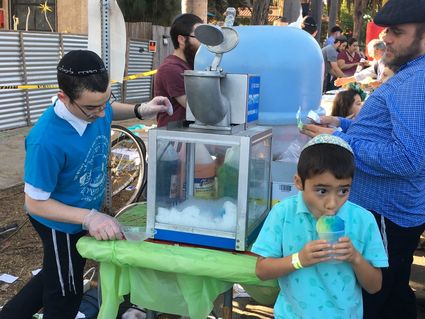 Making multicolored snow cones is a Sukkot tradition. Well, not really, but nothing forbids it

Chabad in Simcha Monica is located on 17th Street. It held its annual Sukkot Extravaganza Block party, closing the street at Broadway and 12th Street Thursday afternoon. Chabad invited the entire community and close to 1,000 people, of all faiths, attended.

Rabbi Isaac Levitansky with a group of volunteers, helped participants shake the lulav and etrog, symbolizing the unity of the entire nation. This is an ancient holiday, mentioned in the Torah, and each Sukkot day, a blessing is recited over the Lulav and the Etrog. People eat outdoors in booths, which commemorates the Divine Clouds of Glory which protected the Israelites in the desert, after their Exodus from Egypt.

There was a multi colored snow cone machine, a petting zoo, kosher food and song, and these round clear things for the kids to tumble around in. I'm a grandmother, I should know what they're called, but I don't. They did seem like a lot of fun however.

"This celebration epitomizes the name of the organization, Chabad in Simcha Monica, as Simcha means joy, which is the theme of this Festival." commented Rabbi Levitansky

Sukkot or Sukkos lasts seven days. The first day (in Israel,  and also the second day in the diaspora) is a Shabbat-like holiday when work is forbidden. This is followed by intermediate days called Chol Hamoed, when certain work is permitted. The festival is closed with another Shabbat-like holiday called Shemini Atzeret (one day in Israel, two days in the diaspora, where the second day is called Simchat Torah). Shemini Atzeret coincides with the eighth day of Sukkot, says Wikipedia.

The Hebrew word sukkōt is the plural of sukkah, "booth" or "tabernacle", which is a walled structure covered with s'chach (plant material, such as overgrowth or palm leaves). A sukkah is similar to the temporary dwelling in which farmers would live during harvesting, a fact connecting to the agricultural significance of the holiday stressed by the Book of Exodus. 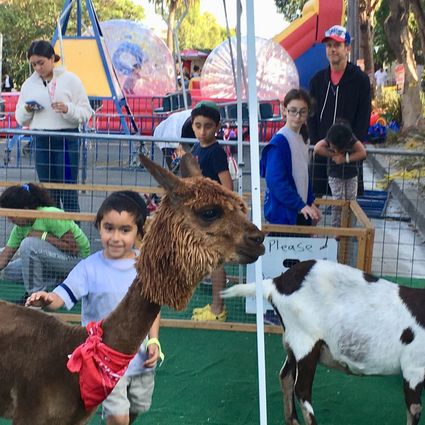 Children learn about the Wonders of the Creator, as they enjoy the petting zoo as part of the Extravaganza celebration

As stated in Leviticus, it is also intended as a reminiscence of the type of fragile dwellings in which the Israelites dwelt during their 40 years of travel in the desert after the Exodus from slavery in Egypt. Throughout the holiday, meals are eaten inside the sukkah and many people sleep there as well.

On each day of the holiday, a waving ceremony is performed with the Four Species, 2 of which are the Lulav and Etrog. Can anyone name the other 2?