As 4 Fires Burn in the Valley, Ash begins to Fall in Santa Monica

The city of Santa Monica alert system warned people to stay indoors, close windows, and avoid the smoke and ash. 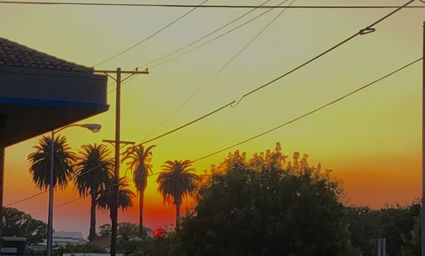 As several fires burning in the San Fernando Valley, Ash has begun to fall in Santa Monica. The largest fire is a 3700 fire in the Santa Clarita Valley called the tech fire. There is also a fire in Castaic called the "#Oldfire," and another fire has burned 10 acres in the supposed a basin. This last fire is in Van Nuys making it the closest fire to the Westside currently.

The city of Santa Monica alert system warned people to stay indoors, close windows, and avoid the smoke and ash.

Freeways are being shut down due to fires that broke out in the area surrounding the Santa Clarita Valley on Thursday afternoon. Santa Monica Fire Department tweeted:

“ You may see/smell smoke from the fires in the surrounding areas. There is no immediate risk to Santa Monica. Please keep 9-1-1 open for emergencies. Please, Monitor Local News for Traffic & information related to #brushfires.”

The 5 Freeway is affected by the Old Fire burning in Castaic, the California Highway Patrol said. Northbound lanes shut down at Parker Road

Southbound lanes were closed at Templin Highway, but then were reopened.

The Tick Fire has prompted closures along the 14 Freeway. Southbound lanes shut down at Ward Road in Ague Dulce; traffic diverted at Crown Valley Road. Multiple 14 Freeway on- and off-ramps were closed as well, according to Caltrans:

The city of Santa Clarita advised drivers heading home to Antelope Valley to take Angeles Crest Highway from the 210 Freeway.