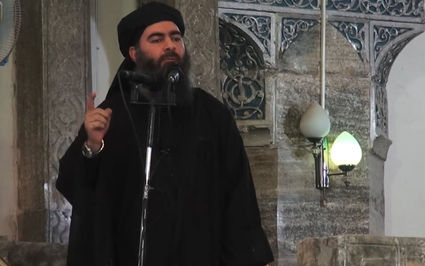 A famous image of Abu Bakr Al Baghdadi declaring the Caliphate from a pulpit in Mosul, Iraq in 2014. The ISIS leader was killed by US Special Operations forces on Oct. 26, 2019 in Northwestern Syria

US Army special operations forces have killed Isis leader Abu Bakr al Baghdadi. This in a raid that occurred Saturday, October 26, 2019 in north western Syria. The New York Times has confirmed the operation and its target. Below is their article

Abū Bakr al-Baghdadi was the leader of the Islamic State of Iraq and the Levant. ISIL has been designated a terrorist organisation by the United Nations, European Union and many individual states, while al-Baghdadi is considered a Specially Designated Global Terrorist by the United States. In June 2014, he was chosen by the majlis al-shura, representing the ahl al-hall wal-aqd of the Islamic State as their caliph.Wikipedia

A senior American official said commandos and analysts were still seeking to confirm the identity of the terrorist, who the officials said was killed in the operation when he exploded his suicide vest.

But a person close to President Trump said that the target of the raid was believed to be the leader of the Islamic State, Abu Bakr al-Baghdadi. A senior administration official said that the president had approved the mission. 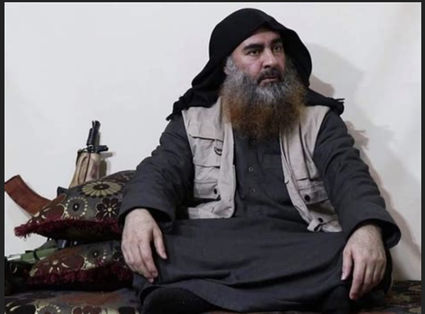 Officials said the raid was in Idlib Province, hundreds of miles from the area along the Syrian-Iraqi border where Mr. Baghdadi was long believed to be hiding. Idlib is dominated by jihadist rebel groups hostile to him.

Mr. Trump teased that a major event had occurred with a tweet devoid of context shortly before 9:30 p.m. "Something very big has just happened!" the president wrote.

Roughly 90 minutes later, a White House spokesman, Hogan Gidley, said that Mr. Trump would deliver a statement at 9 a.m. on Sunday, an unusual time for formal presidential remarks, and one that coincides with the morning news shows. Mr. Gidley declined to elaborate on what Mr. Trump planned to say.

An American official said that commandos from the Army's elite Delta Force carried out the mission with the C.I.A. providing intelligence and reconnaissance information on the ground.