Three generations of the Litvak family have been involved in the pharmacy, Where Eastern and Western Medicine Meet 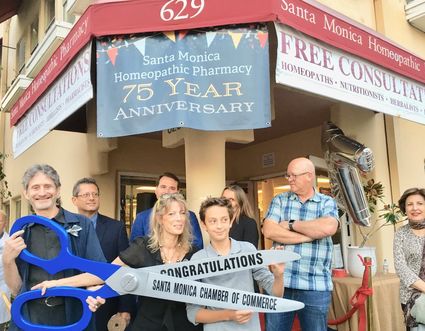 Santa Monica Pharmacy was founded in 1944 by Norman and Mary Litvak. Kim, Joshua and Steve Litvak and Kim's father also took part in the ceremony. "Mary Litvak was born in Buffalo, NY. Norman Litvak was born in the Ukraine but arrived in the US by the time he was 3 months old. Mary's parents arrived in the US in 1903; Norman's in 1912." said Bob Litvak.

In 1944, Norman and Mary Litvak felt it was "their patriotic duty to serve people by providing a pharmacy that would help keep them healthy" despite the World War, explains a publicist. Their store was originally founded as the Santa Monica Drug Company on October 8, 1944 on 7th Street and Broadway.

"Norman and Mary pioneered a new kind of  pharmacy, with care of the customer as the priority," writes an unidentified patron.  "They took time to listen to customers, suggested and encouraged changes towards a healthier life style and made referrals to those physicians who practiced natural medicine.

Norman and Mary put in healthier snacks. In 1967, the City used Eminent Domain laws to move the pharmacy across the street.  They increased the variety of homeopathic remedies offered.

Santa Monica Homeopathic Pharmacy "is a family run business with three generations working side by side.

"The success of the pharmacy can be attributed to many factors but primarily due to the principles that Mary and Norman Litvak instilled in their family  and the staff working at the pharmacy: the commitment to provide knowledge, care, integrity and service to their customers."

As the business grew so did the number of family members  involved in the family business.  The Litvaks had two sons, Bob and Don, who joined to assist their parents.

In 1988 Don's son, Steven (Mary and Norm's grandson) came to work full time "after selling a successful restaurant, which he owned and operated for several years.   Due to his excellent business sense, and a genuine interest in the field, it did not take long for him to further the development of the store's products and services," said the publicist.

"As the store  flourished, additional help was required to maintain customer service.  In 1989 Steve's wife Kim, left a position in banking and began

working full time in the pharmacy.  Her meticulous record keeping and organizational skills added to the business.

"In 1992, Mary and Norman's other son, again which is a part of the 2nd generation of the Litvak Family,  Bob Litvak, began working full time at the

Pharmacy.  Previously he worked twenty years providing programs and services in youth camps and community centers throughout the country.

He brought the skills of public relations, personnel management and a strong belief that serving the needs of the customers is what set Santa Monica Homeopathic Pharmacy apart from its competitors.  Both of his children, Dusty and Shira which are part of the 3rd generation of the Litvak Family, worked the pharmacy while in school." 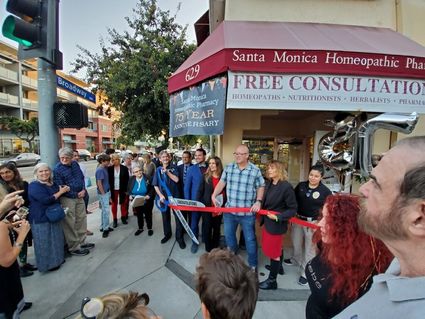 The staff of 21 employees with Kim in front

"The central goal of Santa Monica Homeopathic Pharmacy continues to be providing excellent service and to expand to meet the needs of customers.

"In addition to homeopathic remedies from around the world, the pharmacy offers Western and Chinese Herbs, Vitamins, Minerals, Glandulars and

"Staffing and personnel includes those individuals with knowledge and education in Pharmaceuticals, Homeopathy, Nutrition, Western Herbs,

Chinese Herbs, Acupuncture and Chiropractic Philosophies.  A licensed pharmacist is also on staff.

"It is a place where customers from all over the globe have visited."