By Jason Strangis
Outside the Box

Living Life Without a Car is Worth it in L.A. No More Traffic Jams for Me!

The author goes off the grid, sells his Saturn Ion, and learns to live and love without it 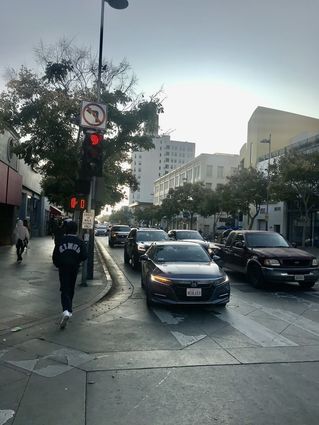 As the State of California becomes more and more clustered on the freeways and busy streets, a growing number of local residents are deciding on other options besides driving a car. Count me in as one of those who now choose not to drive in the large Los Angeles metropolitan area.

Some background is in order here: Ever since I first got my driver's license as a teenager, I've used a car to get around to most places, unless it is within short walking distance (I'm talking within a mile). Having formerly lived most of my life in the Midwest, a car or some other vehicle was essential - especially during the brutally cold and snowy winter months. I certainly didn't want to get stranded during a snowstorm without a vehicle for protection.

But once I moved for good to sunny L.A. in 2018, I made the brave decision to sell my 2008 small silver Saturn Ion (with only about 82,000 miles logged on the odometer). For the record, I received about $3,000, but it was enough to give me a good start out on the West Coast. California here I come!

And so, for the past year and counting I've been without a car. Honestly, it's been a strange yet oddly satisfying trip and a gigantic adjustment in life. No longer am I able to enjoy that familiar feeling of grabbing my keys, getting into my cozy car and speeding along the winding roads with my favorite music blasting from the radio, or listening to sports talk in the background as I have done for so many years of my life.

It's amazing how dependent Americans have become on using a car to get from place to place; everywhere from the shopping mall to supermarket to sporting events. This has become almost second nature to almost all Americans, ever since the first Model T was invented in the early 1900s. With each new generation, the cars have become flashier and faster.

A 2015 survey showed that about 88 percent of Americans owned an automobile. In the past few years I have a feeling that number has decreased when it comes to Californians wanting to own cars. Again, it comes down to more options, and less patience for dealing with traffic jams, gas prices, and parking.

Lucky for me, I've settled down into a popular hot spot in Santa Monica where almost everything I need is within short walking distance. Shops, restaurants, grocery stores, tennis courts, movie theaters, even the Pacific Ocean are all within easy access. It only makes sense that I don't have to deal with all the headaches and hassles of driving a car around the overcrowded streets of L.A. In addition, I'm saving money on high gas prices and auto insurance. And no more worrying about those hard-to-find parking spots and concerns about the meter running out.

Recently, I've discovered that Uber is a great way to get around for those shorter road trips and the price is very reasonable. And there's always the option of taking a taxi - plenty of those parked in the popular Ocean Avenue area near the beach.

But for now, I mostly choose to walk almost everywhere I go. Not only is it good exercise but it's very healthy to be outside in the sunlight and fresh air as much as possible. As I stroll to my selected spots in Santa Monica I notice so many young men and women choosing to travel by bicycles, skateboards or electric scooters - the latest trend sweeping through Southern California. For longer distances others take public transit such as the bus or light rail. The Big Blue Bus system in Santa Monica seems to constantly be in action, with plenty of passengers using it as a way of getting around the city and beyond. And at only $1.25 per trip it's a good bargain. 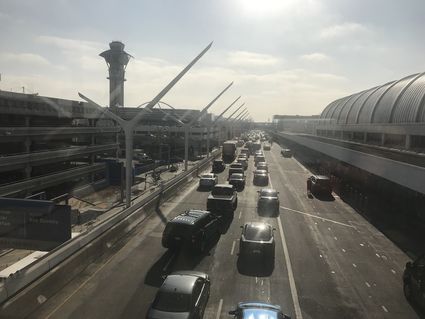 While many Californians are looking for new ways to travel, there will always be those that want to own a car. Hey, automobiles are great for long road trips with spectacular views of the Pacific Ocean and towering mountains and lush green hills and valleys. And let's face it - in a city as superficial as L.A., sporty vehicles such as a Porsche or Corvette will always be a status symbol and attention-grabber. If I had my choice, a cherry red Ferrari would be perfect, even though I'm a relatively slow and cautious driver.

But owning that sought-after sports car is a long way off, if ever. Truth be told, I have every intention of getting a new affordable automobile (more likely a sporty Toyota) at some point down the road. But in the meantime, I'll try and enjoy strolling along the streets of Santa Monica while taking time to smell the flowers and feel the invigorating ocean breeze.

That's how I know that I'm truly alive.