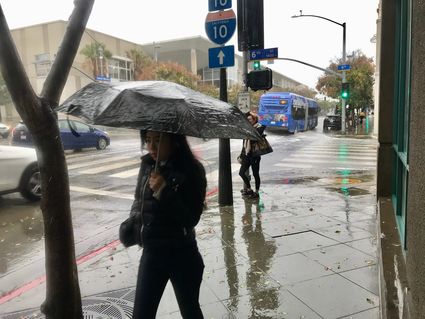 A woman with an umbrella hurries through the intersection of 6th Street and Santa Monica Blvd.

11/27: A storm from the Gulf of Alaska dropped rain on Southern California Wednesday. Snow in the mountains, and cold winds were expected through Thanksgiving making roads dangerous for travelers.

In Santa Monica, homeless men gathered under awnings in Reed Park. On a normal day, they would be lying on sleeping bags and blankets throughout the Park at Wilshire and Lincoln. But the ground was far too wet for that. 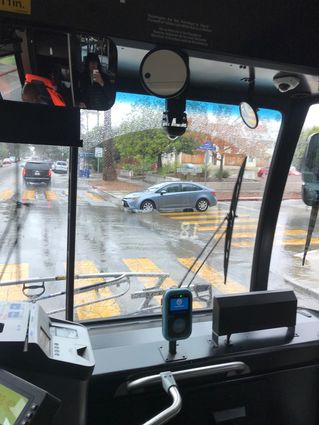 Many employed people had already left town for the Thanksgiving holiday. But one could see people carrying umbrellas as they scurried through streets soaked with rain for the first time in months. Cars and busses sizzled through intersections, driving rain onto the sidewalks. The skating rink at 5th and Arizona had to close while rain puddled on the ice.

"Travel could be very difficult to impossible," warned an NWS statement. "The hazardous conditions could result in temporary road closures. Gusty winds could bring down tree branches and cause power outages."

A winter storm warning signifying an expectation of difficult travel conditions will be in effect in the San Gabriel Mountains from 4 a.m. today until 4 a.m. Friday.

Most mountain areas will get 6 to 12 inches of snow. On Interstate 5, the Grapevine expected to see 3-6 inches. Up to 24 inches of snow is expected to accumulate at higher elevations, making Mammoth expect skiers.

The rain was expected to last at least until Thursday evening.