District Attorney George Gascon: Don't Let the Door Hit You on the Way Out 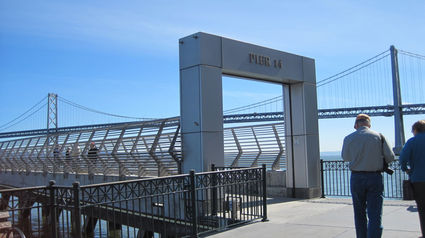 On July 1, 2015, 32-year-old Kate Steinle was shot by José Inez García Zárate, while walking with her father and a friend along Pier 14 in the Embarcadero district of San Francisco. Zarate was convicted of no crime in connection with her death at the hands of a 6 time deported illegal alien.

Although I spent my high school years in a suburb of Los Angeles, I've called San Francisco my home for the last 19 years.

In 2001, I embarked on my career of public service, joining the California Attorney General's Office in the Criminal Division and becoming a San Francisco Assistant District Attorney in 2006. San Francisco has always been a challenging place to be a prosecutor. The judges and juries are quite liberal and the Public Defender's Office has had a long history of aggressive tactics and political support. I learned from the ground up to be smarter, better prepared, and more dogged than the defense attorneys I faced. I also learned the value of trying to work out deals, that sometimes compromise was a win, and that people who made mistakes could be redeemed through second, third, or even multiple chances to straighten out.

In 2009, San Francisco got a new police chief named George Gascon. Eighteen months later, then-Mayor Gavin Newsom appointed him the interim District Attorney when Kamala Harris was elected to Attorney General. Even though he'd never tried a case, let alone prosecuted a case, Gascon's statement on his qualification to be the District Attorney was telling. He stated, "Running a D.A.'s office is not the same as prosecuting cases on the floor. They're different skill sets. I believe I have the organizational skills, and I have an understanding of the criminal justice system not only today, but where we need to be in the future."

Herein lies one of the most basic flaws with George Gascon being the chief prosecutor in San Francisco -- the gross misconception that being the head of an office of prosecutors is little more than a management position. For those of you who have been in the trenches, who know what it's like to do battle in the courtroom, who know that our role is to do what's right, you know that your elected District Attorney is your leader, not a manager.

When the head of your office hasn't spent a day in your shoes (and never cared to understand what a courtroom prosecutor does), as a line prosecutor, you don't get what you need to succeed and it's demoralizing. The office has been plagued with understaffing on attorney and support levels for many years.

Gascon also failed to provide leadership in very basic ways, such as pushing back on the Public Defender's Office for gamesmanship that occurred in the courtroom. There's a reason why San Francisco Superior Court tries misdemeanors at a rate 19 times higher than any other county in the state and why there are more homicides older than four years still waiting for trial than any other county in the Bay Area. It's because of a weak District Attorney's Office without true courtroom leadership.

You can see the real impacts of someone at the top not knowing the job of being a prosecutor by the massive attrition suffered over his tenure. Yes, I took note of who was leaving as did many of my colleagues. The statistics that follow are not "official," but reflect what has happened to an agency that is vital to public safety.

In the last term served by George Gascon, approximately 61 of the 140 or so attorneys left the San Francisco District Attorney's Office, 24 in the last 8 months of 2019 alone. More than half of those leaving in those final four years were women, and more than a third were people of color. While some attrition is inevitable, the flight from Gascon's administration was startling. No longer was it confined to mid-level attrition, but it reached across the ranks from early retirements to attorneys who had been in the office less than 2 years. I too left the office in 2017 because it became increasingly difficult to be a prosecutor under Gascon's leadership.

While, yes, it's difficult for police to catch porch pirates and auto burglars, what I think is the real issue is that San Francisco has lost the deterrent effect of prosecution. Reputationally, San Francisco is now widely regarded as the place where you can commit a crime and get away with it. And when you have a weak DA like George Gascon, it's no wonder San Francisco has gone by the wayside, crooks commute into San Francisco to commit crime, and why many were celebrating his departure.

So, Los Angeles County, take a look at the state that Gascon left San Francisco as a cautionary tale. It's no wonder he didn't seek re-election in the county where he was an incumbent. It's because he could never win another term here. He left the city in such shambles that even San Francisco's Mayor and City Attorney took the unusual step of endorsing his competitor, incumbent DA Jackie Lacey. George Gascon wreaked havoc on the San Francisco DA's Office and the City as a whole. I just hope he doesn't get an opportunity to ruin Los Angeles as well.