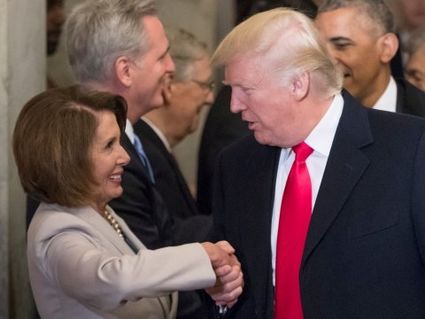 "Strap in, because we're going to impeach every president going forward," said Trump in a letter to Pelosi

One thing is certain: Trump joins a small club including Andrew Jackson, Abraham Lincoln, Herbert Hoover and Richard Nixon, as the most hated US Presidents ever while in office.

"Trumps letter to Pelosi is filled with false and misleading facts," said CNN. "It accuses Nancy Pelosi of abusing her power, when it's Trump who abused his."

"This is the most partisan impeachment ever," said FoxNews. "It is an impeachment designed to make Trump unelectable in 2020, rather than to remove him from office. Ironically, it will in fact guarantee his re-election."

" President Donald Trump slammed a historic impeachment vote expected this week in the House as "spiteful" and "terrible" in a rambling, six-page letter to Speaker Nancy Pelosi on the eve of the impeachment vote," says USA Today. https://www.usatoday.com/story/news/politics/2019/12/17/impeachment-trump-calls-democrats-deranged-letter-pelosi/2666116001/

"Trump's letter to Nancy Pelosi is the longest and fullest expression of his defense against impeachment. It's also loaded with half-truths and vitriol." writes the LA Times. https://www.latimes.com/opinion/story/2019-12-17/trying-to-make-sense-of-trump-letter-to-pelosi

The guy is dangerously unhinged. His letter will go down in history as more proof that he was completely unfit for office.