Concern over the assassination of Gen. Soleimani expressed in Los Angeles Streets 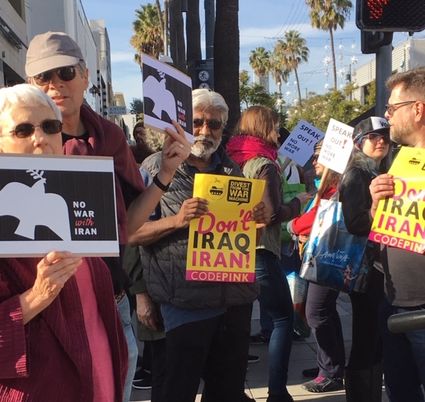 Protestors in Santa Monica held up signs that said "Don't Iraq Iran!" and "People Over Planet Over Profit!"

Hundreds of local residents took to the streets of Los Angeles and Santa Monica on Saturday Jan. 4, 2020, protesting the escalating threats from the Trump administration to attack 52 targets in Iran.

The protestors see the US stumbling into another Middle Eastern war. "I ordered Soleimani killed not to start a war, but to prevent one," said US President Donald J Trump in a speech.

In demonstrations held in Pershing Square, protestors held up signs that said "No War or sanctions on Iran..." and "U.S. out of Iraq." Pershing square is named after the general who led the US Expeditionary Forces in Europe during World War I.

In Santa Monica, about 3 dozen protestors on the corner of 4th Street and Arizona held up signs that said, "

Many of the protestors visible in Santa Monica were of the generation that protested the Vietnam War. They do not want to see yet another generation march off to a foreign war with no end in sight. 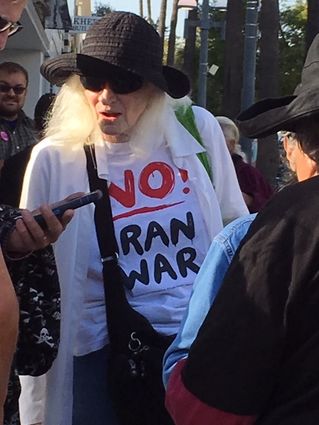 Most of the protestors in Santa Monica we're of the generation that protested the Vietnam war.

Those supporting the US action, held a protest outside the Federal Building in Westwood. Ianian Americans ate sweets, stomped on photos of Soleimani, and danced as they celebrated Mitra Samani who was tortured and raped in prison after protesting a law that made women second class citizens, said she was tortured by the regime. Samani said the move was probably popular in Iran, where, she said, 12,000 protestors had been arrested.

Many people celebrated at home, said one dissident. Graffiti on Teheran walls, celebrated the killing by a Reaper Drone of Iran's most notorious general.

Soleimani's body arrives in Iran for burial. The Iranian government has promised to retaliate in 35 different sites in Iraq, Syria and Israel. The US military said in a statement that 2 rocket attacks landed near American troops in Iraq, but no US troops were harmed.

Trump will do anything to distract from his impeachment trial, won't he?