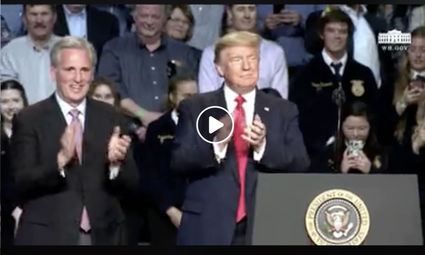 The diversion favors farmers in Kern County and the southern end of the San Joaquin Valley. Which is why the Incumbent President was in Kevin McCarthy's district touting the policy.

The State of California will sue to block the diversion, which will negatively impact endangered species. The State will argue that it must approve the diversion of large amounts of water south, where most of California's 40 million residents live.

Several thousand Farmers, high school students, soccer moms and just folks filled the Hanger at Bakersfield Airport to hear the President. The rally was attended by Devin Nunes and Kevin McCarthy, who's district includes Kern County. Speakers included several family farmers, who said that they had been able to keep their farms and prosper due mainly to Trump's economic policies.

Trump blamed the California's homeless crisis on, well, Democrats. "California used to be a beautiful State. It's a shame what's happened to it, with all the homeless. And what's happened to California, is the fault of Democrats, in particular (House Speaker) Nancy Pelosi and (Calif. Gov.) Gavin Newsom. And that the Federal government will have to step in if it gets any worse," Trump promised. 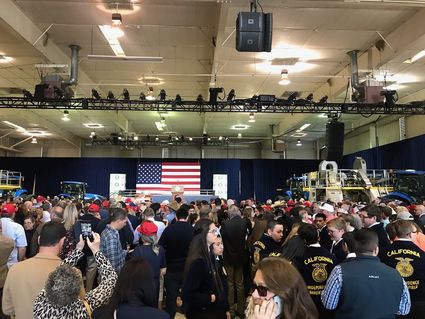 He suggested Pelosi and Rep. Adam Schiff's districts would be targeted in the 2020 election. "We hope to flip 7 Congressional seats," the Republican president told the cheering crowd of about 5,000.

The 45th US President also says that the Democrats resisted and resisted the reassignment of San Luis Mendota Water District supplies to Southern California homes and farmers, even though the California drought has ended, and even though the State has built no dams since 1980.

For more information on the agreement signed on 2/19/20 by President Trump, click on this link: . https://www.smobserved.com/story/2020/02/19/news/water-authority-official-comment-on-the-signing-of-the-record-of-decision-on-reinitiation-of-consultation-on-the-long-term-operations-of-the-central-valley-project-and-state-water-project/4448.html

Because blaming people without offering any solutions is what real leaders do, right republican voters?