SMMUSD Hides Behind Federal and Local Agencies in Coronavirus Response

SMMUSD has determined that despite Covid19, large gatherings are fine! What, me worry? 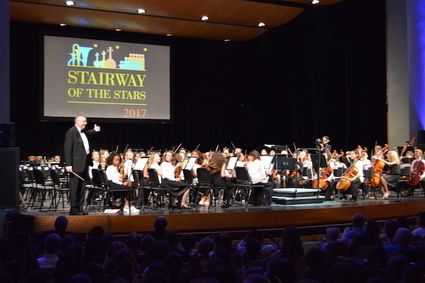 On Wednesday 3/11/20, SMMUSD announced the cancellation of the annual Stairway of the Stars concerts on March 16, 20, and 26.

An email sent out Tuesday by Dr. Ben Drati, School Superintendent for the Santa Monica-Malibu Unified School District, seeks to explain the response of the district to the outbreak of the Covid-19 virus outbreak and possibly to allay the fears of the community.

UPDATE: SMMUSD sent an email out at 9:10 pm Wednesday night announcing the cancellation of the Stairway of the Stars rehearsals and concerts. They are also cancelling field trips, assemblies, performances, fundraising activities and other large gatherings. The quarantine time after relief from a fever has been expanded to 72 hours. However, students who have traveled to a Level 3 Warning area are still expected to self-identify and not come to school. Also, schools are not closing and after-school programs remain open. In the email, Dr. Drati says the district is taking direction from the Centers for Disease Control (CDC), the Los Angeles County Department of Public Health (LACDPH), and the Los Angeles County Office of Education (LACOE). The LACOE has stated "There is currently no recommendation to limit or cancel public or large events."

Data from Korea and China, where this virus started, shows that limiting social gatherings slows the spread of the virus.

The resistance to make a practical and reasonable decision in this instance throws into doubt the rationality of the rest of the decisions the school district outlines in Drati's email.

It is safe to send your child to school, Drati argues, because the school's custodial team has "increased sanitation efforts." Since the prior sanitation efforts of the overworked custodians leaves much to be desired, this is not saying much. It's not the "additional time" and "increasing frequency" of cleaning that will disinfect school surfaces - it's SUFFICIENT cleaning that might help.

Additionally, Drati assures us that the district has "ordered classroom supplies including hand sanitizer and disinfectant." This should be enough for you, worried parent, even if Drati admits that "some items are on backorder." The virus will give points for trying. It will look at the district's records, see that hand sanitizer is on backorder, and give us a break.

In the FAQs attached to Drati's email (something few will read), we're told that students who have traveled to places at a Warning Level 3 or Alert Level 2, which currently includes China, Iran, Italy, South Korea, Japan, must report their travel to their principal and stay home for 14 days.

Perhaps the most absurd policy Drati communicates is the 24-hours-without-fever constraint. The normal school policy is that a student who has run a fever should not return to school until they have been fever-and-symptom-free for at least 24 hours. That might work for the common cold or stomach flu, but coronavirus is not like that. In fact, even the CDC states that the timing for releasing a coronavirus patient from quarantine must be made on a case-by-case basis. Probably because nobody yet knows how long a patient is still contagious after they are symptom-free. The common flu can be transmitted from 3 up to 10 days after symptoms have resolved. It might be another common-sense rule to extend the quarantine period for students who've had a fever.

All of this calls into question the wisdom of keeping the schools open, period. As I write, there are currently 20 coronavirus cases in Los Angeles County, one of which is a "community transmission" with no known point of origin. That doesn't seem like a lot. But all it takes is one infected person to walk around symptom-free for two weeks, infecting everyone in their path to increase the 20 to 200. This will almost certainly happen, and probably already has happened. The idea that among the 11,000 students in the district, there will not be contact, somewhere, with an affected individual is naive.

In 2017, a group of students brought the norovirus stomach flu back with them from their trip to Yosemite. The school district idiotically closed only John Adams Middle School, the one that had sent the kids to Yosemite - for one day. But guess what? Kids at John Adams had siblings at other schools. In a completely predictable fashion, norovirus, a highly contagious and hardy germ, spread throughout the entire school district. The disease ravaged the school community for two months, keeping hundreds of kids home and sickening their families as well. Two students died, though it is unknown if norovirus was to blame.

If the district had closed all schools for the gestation period of the disease, they would have saved a great deal of misery. Coronavirus is far more dangerous than norovirus, particularly to elderly relatives and connections of public school students. 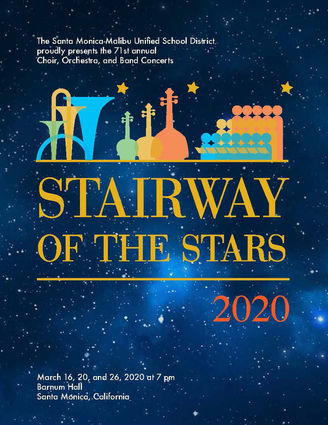 On Wednesday 3/11/20, SMMUSD announced the cancellation of the annual Stairway of the Stars concerts on March 16, 20, and 26.

It is unfortunate that our factory-style form of education creates perfect petri dishes out of students. But now we have to deal with it.

UPDATE: Official word from the district Wednesday morning: out of an abundance of caution, mostly due to a large gathering, Stairway is cancelled for 2020.

"Band, orchestra, and choir after school rehearsals are no longer necessary because there is no longer a Stairway concert to prepare for. Theatre rehearsals will continue as long as JAMS classes are in session and as long as our shows are on schedule for May. At rehearsal, students do not contact as many surfaces as they do in the ordinary classroom, since we do not use desks, tables, laptops, door knobs, etc. Still, we will have students wash their hands before rehearsal and before snack. All of our snacks are individually wrapped. "