Vice President Pence to LA Hoarders of N-95 Masks: "We Will Find You."

President writes to North Korea, Iran and every other country, offering to share supplies and information. 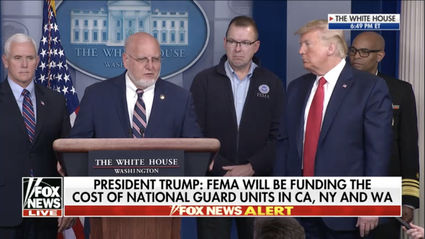 At a white house press briefing Sunday, Vice President Pence threatened an online broker who claimed to have 10,000,000 masks in a Los Angeles area warehouse. He said that if the broker didn't sell the masks to the Feds, they would us the Defense Appropriation act to seize them.

He also said the USNS Mercy would go to Los Angeles. It would not serve coronavirus patients, but other emergencies.

"If I called companies and said, you build ventilators, they don't even know what a ventilator is," he added.

We are really backing up the Governors," he said.

The Vice President said the National Guard would be made available to Governors at no cost to the State if requested.

He added that New York Governor Cuomo and California Gov. Gavin Newsome "have been total gentlemen."

Trump noted that Rand Paul had Coronavirus, and wished the Senator the best. He expressed surprise that Mitt Romney was self quarantining. He said that they were looking at remote voting for the Senate.

On the Stimulus bill, he said "We want to help the worker, we don't want to fund stock buy backs."

The President avoided saying when they would open Main Street back up. "I can't tell you that. I can say that we've had good results, the American people have been amazing, and we're very close to a deal on the stimulus bill."

Aside: As they spoke, Stock Futures hit the limit down.

"They should have the hospital systems stocked. But this is beyond anything that anyone thought possible. Hopefully this will be unique for many centuries and we won't see this again. But the systems are supposed to be ready willing and able. I have great love for New York City and State, and we'll be sending a ship there, we may use cruise ships (as hospitals) also."

"I think Bill DeBlasio is trying very very hard. Speaking of hand sanitizer, we have whiskey and alcohol companies going quickly into the hand sanitizer business." 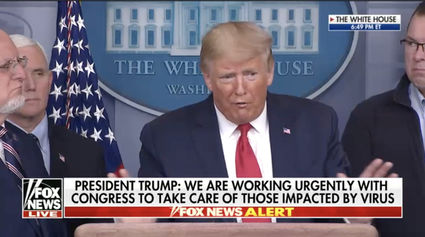 President announces the USNS Mercy will be going to Los Angeles, which has proportionately 5 times fewer hospital beds than Seattle.

The Surgeon General said "Health care workers, we hear you." VP Pence also said that undocumented persons, absent certain circumstances, the INS does not target emergency rooms or health clinics or the drive through clinics. So illegal aliens can be tested without fear of deportation. Trump echoed his assurances. "I think it's important to test that person."

The surgeon general noted that 9 of ten people who think they have Coronavirus, when tested, don't have it. They have some of the symptoms.

“ The federal government has deployed hundreds of tons of supplies from our national stocks pile to locations with the greatest need in order to assist in those areas,” Trump said.

Supplies include gloves, hospital beds, N95 masks and gowns that will be delivered in the next couple days, the president said.

Trump was briefed in January about it and knew the seriousness of it yet he did nothing but downplay it as the democrat's latest hoax. Now we're supposed to take this administration seriously?