Santa Monica takes steps that other communities have, and new infection rates appear to be dropping slowly. 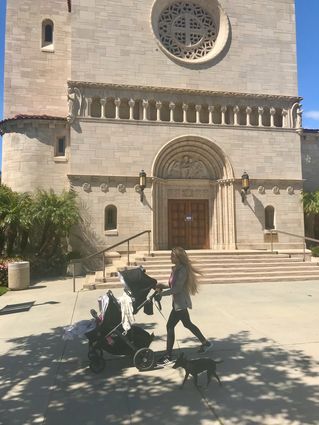 A mother pushes a stroller past a closed St. Monica's catholic church.

The worldwide coronavirus emergency which came upon us so quickly continues to evolve.

Many people take walks or exercise in Palisades Park, politely maintaining 6 feet distance from each other when possible. I have spoken to occasional groups of tourists from Brazil, Germany, or even China this week.

"Be prepared to isolate or to quarantine," said LA County Dept. of Public Health's Barbara Ferrer Wednesday. She apparently meant have enough food and other stores, to stay home if you must.

Quarantines for those with Coronavirus, or those who have had close contact with a diagnosed patient, last 14 days.

In Los Angeles, Mayor Eric Garcetti announced that those who violate street sweeping ordinances, will not receive tickets. Neither will those who drive with expired driver's licenses or license plates, or drivers who park at expired meters.

The LA Dept of Water and Power will not shutoff violators for late payments, he said. Garcetti also announced that 1200 retired medical professionals have signed up to work in the City's hospitals if needed. 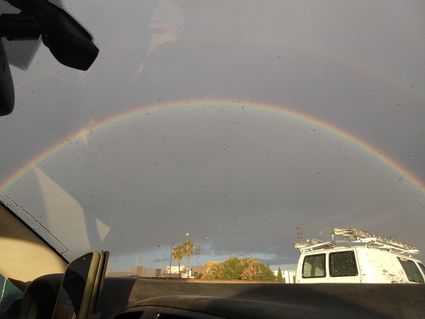 A rainbow is visible over the Westside.

New York City is dealing with the largest Covid-19 outbreak in the United States. Over 20,000 cases have been diagnosed, and 1000 patients have died so far. On the other hand, New York Gov. Andrew Cuomo notes that the rate of infections (i.e. relative to the existing number of diagnoses), does appear to be slowing, a positive sign.

Cal. Governor Gavin Newsom has negotiated with several major banks for a 90 day grace period for those directly impacted by the coronavirus emergency. The exception is Bank of America which will give 30 days only.

Worldwide, there are 500,000 cases worldwide, 22,000 deaths, with 125,000 people having recovered. Britain's Prince Charles, 72, was diagnosed this week, as have been several senators and members of Congress.

We decided to print a newspaper this week. But we wondered whether people would come out of their homes to pick up copies.