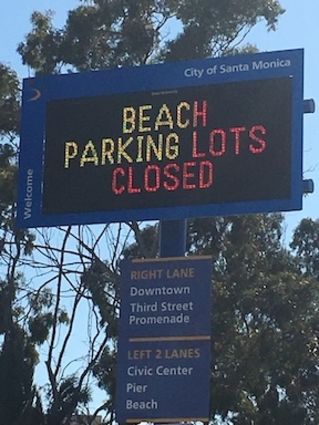 Following Santa Monica's lead, Hermosa Beach closes the Strand and the beach to the public.

Hermosa Beach announced that it will follow the lead of cities such as Los Angeles and Santa Monica, and close beaches and beach parking lots to the public. Like other West Coast urban areas, authorities have struggled to convince people, young people especially, not to gather in groups or socialize in public areas designed for them to do exactly that.

The press release from the City of Hermosa Beach follows:

The Sooner, the Better: City Acting to Avoid Another Weekend of People Gathering at Beach, Which Would Increase the Risk of Virus' Spread

HERMOSA BEACH, CA – The City of Hermosa Beach announced today that it will be closing its beach and beachfront walkway, the Strand, at 6 a.m. Saturday, March 28, to protect public health and prevent a repetition of last weekend, when groups of people congregated on the beach and Strand. These gatherings increased the risk of spreading the novel coronavirus (COVID-19) because people were unable to maintain the required distance of a least six feet from people who are not members of their household.

San Diego, Laguna Beach and several other Southern California communities have also announced beach closures. Santa Monica, the City of Los Angeles and Manhattan Beach recently closed their beachfront parking lots. Hermosa Beach is unique among South Bay cities in owning its own beach and being able to proactively decide to close it. Los Angeles County owns the other South Bay beaches and will determine if those will be closed.

"We understand the desire to be outside and in nature is more powerful than ever and being out in nature is permitted if people avoid crowds and maintain six feet of distance from non-household members," said Hermosa Beach City Manager Suja Lowenthal. "While most people are staying home to slow the spread of COVID-19, the actions of a few who choose not to follow the rules can cost the lives of many. The sooner we close the beach and Strand, the better our chance to slow the spread of COVID-19."

Public health experts have reported that the virus can spread exponentially in groups, and the virus can remain on surfaces of such things as benches, railings and outdoor equipment for up to 72 hours.

"The Governor has said that people can still take short walks and enjoy other activities as long as they avoid congregating with people who are not members of their own households," said Lowenthal.

Hermosa Beach's Downtown Parking Structure also will be closed to the public to discourage people traveling to the beach and the Strand. Hermosa Beach's closures will go into effect at 6 a.m. Saturday and will remain in effect until the City has determined it is safe to re-open the beach, Strand and parking structure.

Lowenthal said the closures were needed to ensure compliance with Gov. Gavin Newsom's Stay at Home Order, which requires everyone to stay at home except for essential needs. Essential Needs include getting food and necessary health care, caring for a relative or friend or going to an essential job. The governor also allowed for short walks near a person's residence but has said people should not be congregating at public places, including California's beaches.

To implement the closures, City Staff will be erecting signs and barriers at access points to the beach and Strand over the next two days, and the Hermosa Beach Police Department will be patrolling the beach to enforce the closures.

"We are hoping for voluntary compliance, and police officers will initially be informing the public about the closures," said Hermosa Beach Interim Police Chief Michael McCrary. "But police officers will start writing citations and imposing fines, if needed, to keep the public safe. These closures apply to everyone because the beach belongs to all Californians, and the police cannot effectively enforce limited access for just local residents or select groups to use the beach and Strand."

Information regarding coronavirus is changing frequently, and the City will provide the latest information about COVID-19 and links to resources on its website.