Coronavirus: LA Police Are Forcing the Homeless to Move From Parks and Encampments, to Hotels and Shelters

Covid19 crisis forced local police to move homeless off Venice boardwalk, and into hotels rented by Los Angeles County for them. 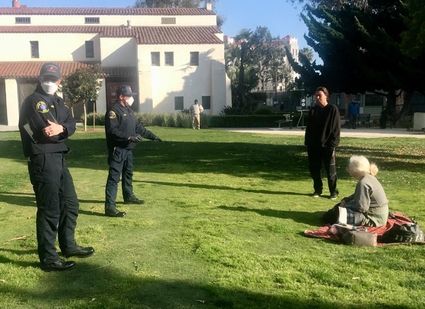 Has coronavirus finally forced local police to move the homeless out of parks and streets? Here, 2 SMPD officers attempt to convince 2 local homeless women in Reed Park to move to a homeless shelter. One woman began to yell at the officers that she wouldn't go.

If you live on the Westside of Los Angeles or in Santa Monica, you are well aware that many thousands of homeless people live in parks. Some residents have long complained that their homeless neighbors are not just poor, but also ill mannered, drug addicted and mentally ill. Others advocate for peaceful coexistence.

It would appear that Sunday March 28, the international Covid19 crisis forced local police to finally move the homeless out of parks and boardwalks, and into hotels rented by Los Angeles County for them.

The large homeless encampment on the Venice Beach boardwalk has apparently been broken down and removed. Last week, the County of Los Angeles announced that it would be renting some 5,000 hotel rooms to house the homeless.

The LA Times reported on March 19th that to avoid having to hospitalize 12,000 of LA County's 60,000 homeless people, the State of California would mandate that the County lease hotel rooms for them temporarily.

To avoid that prospect, the governor has directed local governments to procure hundreds of facilities statewide - hotels, motels, recreation centers - to house the most vulnerable. Some cities and counties are already moving forward. 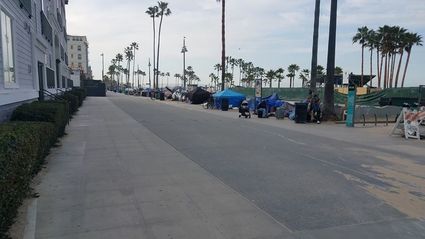 Venice residents report that the Boardwalk is now suddenly free of homeless encampments and tents visible there for the past four or five years.

"This is essentially a threat to the population generally," said Los Angeles County Supervisor Mark Ridley-Thomas, co-chair of Gov. Gavin Newsom's statewide task force on homelessness. "It is not uncomplicated and it's certainly not for the faint of heart, but we have an obligation to address this. Otherwise the matter worsens."

Coronavirus, Wuhan Virus or Covid-19 has forced the most drastic sudden restrictions on American society and foreign countries since World War II.

Nationally, schools, businesses, and professional athletics are all shut down. The nation is shut down from the Santa Monica Pier and Disneyland to the Seattle Public Market and the Statue of Liberty in New York Harbor. European and Asian countries have done likewise. It would appear that liberal cities' extreme tolerance of homelessness, has suddenly ended as well.

Only a couple cases of Covid-1 have been diagnosed in California's homeless community so far. The epidemic has caused 26 deaths among 1862 LA County Coronavirus cases as of March 27th.