Presumably, the parks will open to residents on Monday. Or will they? 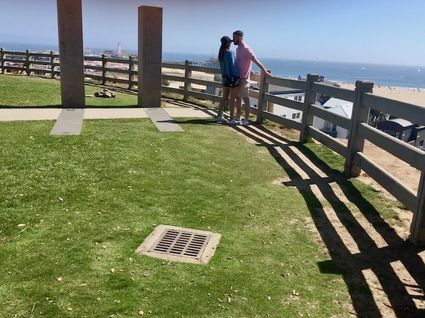 A couple share a romantic moment by the War Memorial in Santa Monica's Palisades Park.

Santa Monica's most distinctive feature, Palisades Park, looks out over the ocean from Cliffs up to 400 feet above the Pacific Coast Highway. To prevent crowds from spreading the Coronavirus, the City has announced that Palisades Park is closed this weekend.

Presumably, the parks will open to residents on Monday. The County has said that even during the lockdown, people may exercise (but not gather) including in City parks.

The order seems well intentioned and echoes orders made across the country and around the world. But civil libertarians noticed that yet one more of our civil rights, the right to freedom of movement, has been impinged. Authorities around the world have pleaded with people to stay indoors, arguing that Covid-19 is the once in a century threat to public health smart people like Bill Gates have warned would come one day. They cite Italy and New York as examples we don't want to follow. 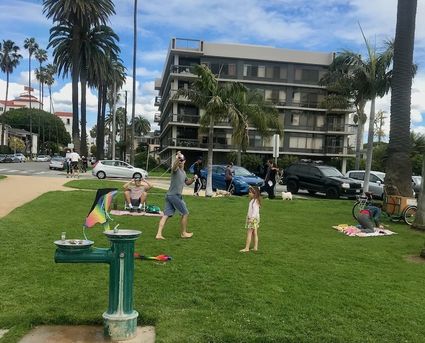 according to Wikipedia, "Palisades Park is a 26.4-acre park in Santa Monica. The park is located along Ocean Avenue on top of the coastal sandstone bluffs, offering breathtaking scenic views of the Pacific Ocean and the coastal range. It extends over 1.5 miles from the Santa Monica Pier at its southern end to Adelaide Drive at its northern end. It is lined with more than 30 varieties of plants and trees, including eucalyptus, pine, palm, and fig trees.

The park includes benches, picnic areas, pétanque courts, restrooms and the historic Santa Monica Camera Obscura. A bust of Arcadia Bandini is located in the park's rose garden. A nearby wood sculpture entitled Gestation III is notable because of its alignment with the setting sun on the winter solstice. A distinctive Native American Totem Pole donated to the City in 1926 is located at the park's northern end. Cannons are on display at the park's southern end. Near the California Incline, a sculpture named Overlook Beacon evokes a sailing ship with mast and wooden deck.

A Santa Monica City Ordinance prohibits smoking in any City park. Barriers discourage visitors from approaching the cliffs, which are prone to erosion and landslides. Use of the park by fitness instructors has generated some controversy.

No, the absolute final indignity would be to needlessly die from this virus after being repeatedly warned about social distancing. Hey selfish residents, we were forced to close the parks because you wouldn't stop crowding them. Stay at home for a few weeks. It's not that big of a sacrifice!

Notably missing from the City's announcement, or from this article, is any explanation of WHY shutting down this large park was necessary, while other -- much more compressed -- pocket parks such as Reed and Tonga, remain unaffected. The Constitution gives cities broad powers, including the right to restrict freedom of movement and assembly for compelling reasons, but only by the least restrictive means possible. For Palisades Park that would mean social distancing, not closure.

The grammar in this article falls apart halfway, much like the logic of the author.